Home/Arts, East Asia/Double Oscar winner Asghar Farhadi on the perils of Academy Awards and filming outside Iran
Previous Next

Oscar-winning Iranian filmmaker Asghar Farhadi in Hong Kong, where he introduced a screening of his latest film, Everybody Knows. (SCMP)

When he won his second Academy Award, for The Salesman, Asghar Farhadi was far from Los Angeles. It was February 27, 2017 and he was watching the ceremony with family and friends in his living room in the Iranian capital, Tehran.

Despite having received special dispensation, Farhadi chose not to travel to the Oscars in protest at US President Donald Trump’s temporary ban on entry to the United States by people from Iran and six other Muslim nations. For someone who seldom lets politics cloud his films’ focus on the nuances of the human condition, it was a striking gesture of support for the politically oppressed.

Yet he doesn’t rule out filming a first English-language feature in the US or the United Kingdom some day.

“Perhaps I will make a film in English. I just don’t know when,” he says in Farsi through an interpreter on a visit to Hong Kong. “And I don’t think the political relationship between Iran and the US or the UK would have an impact on that decision – I don’t really think about all that.

“Once a really good story pops into my head and I decide to make a film about it, I would do it. I wouldn’t think about the side issues.”

Indeed, he wasn’t put off by the challenges of filming Everybody Knows, his first Spanish-language film, in Spain.

Farhadi, 46, who won his first best foreign language Oscar in 2012 for his humanistic masterpiece A Separation, was in Hong Kong recently to attend the Hong Kong International Film Festival and introduce Everybody Knows, his eighth feature film.

Set in Spain’s wine country, the film’s lead actors are real-life couple Penelope Cruz and Javier Bardem, who have now worked together on nine films. In Everybody Knows, they play Laura and Paco, former lovers who are reunited at Laura’s family home for the wedding of her younger sister.

When Laura’s teenage daughter (Carla Campra) goes missing on the night of the festivities, the film turns into a kidnap drama.

Almost everyone in the household becomes a suspect as family secrets and long-forgotten grudges are revealed, having built up since Laura moved to Argentina and married Alejandro (Ricardo Darin) many years earlier.

While the premise of this psychological drama, with its revelations and shifting perspectives, is unmistakably Farhadi territory, the writer-director was initially hesitant about the project. 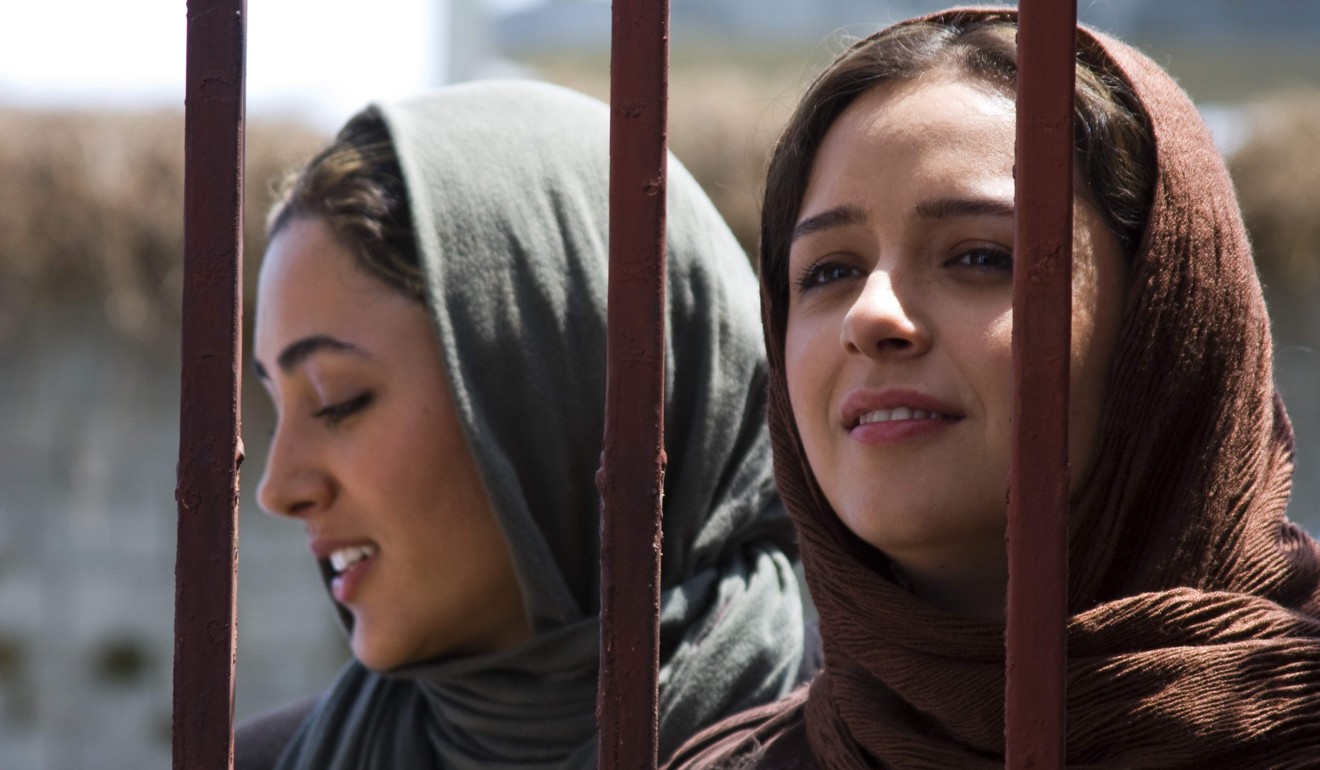 Golshifteh Farahani and Taraneh Alidoosti in a still from Farhadi’s 2009 film, About Elly.

“When I started thinking about the plot and I started reading it to my family, my daughter pointed out to me that it looks like About Elly,” he says, referring to his acclaimed 2009 film of that name. About Elly also makes use of a disappearance to shine a light on its characters’ complex, capricious and often contradictory intentions.

Farhadi initially put the idea aside to make The Salesman, set in contemporary Iran, before returning to it. 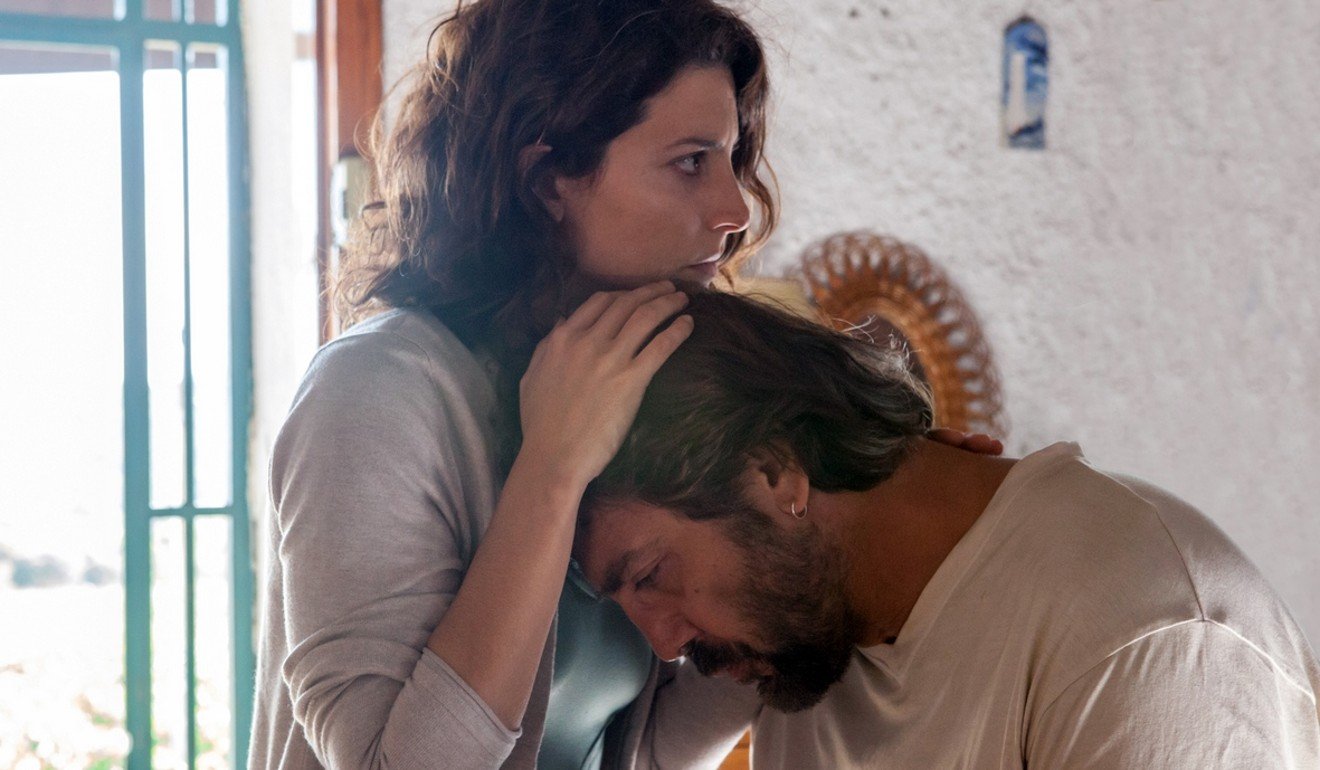 Barbara Lennie and Javier Bardem in a still from Everybody Knows.

Everybody Knows is the second film Farhadi has shot outside Iran – after 2013’s The Past, which was filmed in Paris and primarily in French, and stars Berenice Bejo and Tahar Rahim alongside Iranian actor Ali Mosaffa.

“I do prefer to make my films in Iran – even though, sometimes, going outside of Iran and working in a different culture is like a new experience,” Farhadi says. “I get to know all about their cultures through filmmaking. But once we have started shooting a film, I have the same feeling, whether we’re in Spain, in France or in Iran.”

Everybody Knows is also the first film Farhadi has made without any Iranian characters or Farsi dialogue.

“In The Past, there was still an Iranian character in the story. But this time, I told myself that I don’t need any help [from an Iranian context] any more. I want to do it my way. I wanted to have the experience of plunging into deep waters without having a life jacket,” he says. 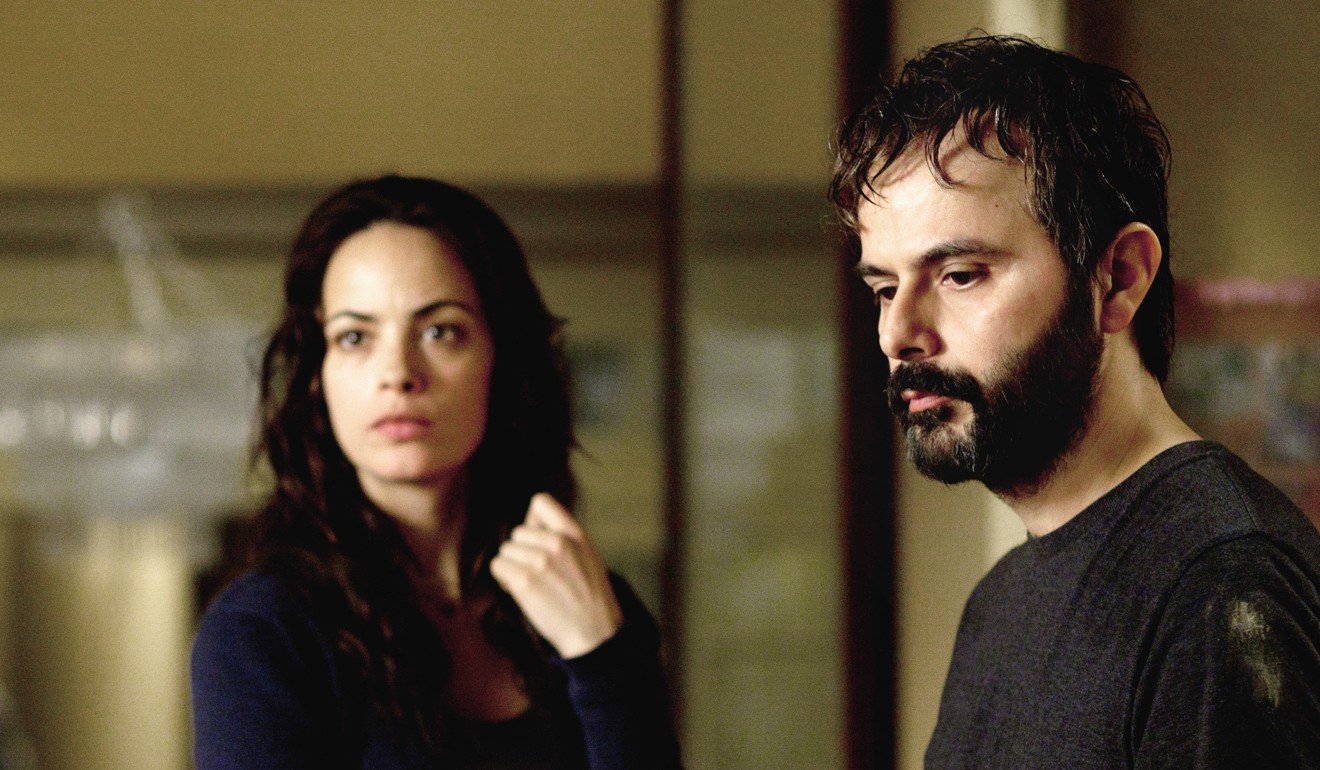 Berenice Bejo and Ali Mosaffa in a still from Farhadi’s 2013 film, The Past.

Working abroad allows Farhadi to show aspects of life that are off-limits in his home country. In Everybody Knows, for instance, there are Catholic imagery, scenes of alcohol consumption and candid discussion of infidelity.

“When you work outside Iran, there’s no such thing as censorship,” he says, referring to the country’s Ministry of Culture and Islamic Guidance. “You are free to put into practice whatever you think of.

“But there is also a paradox here: even when you can work on issues that are not related to your own culture, you can’t just go and do anything. Even when I make films outside Iran, I still look to touch upon topics that are similar to those in my culture.” 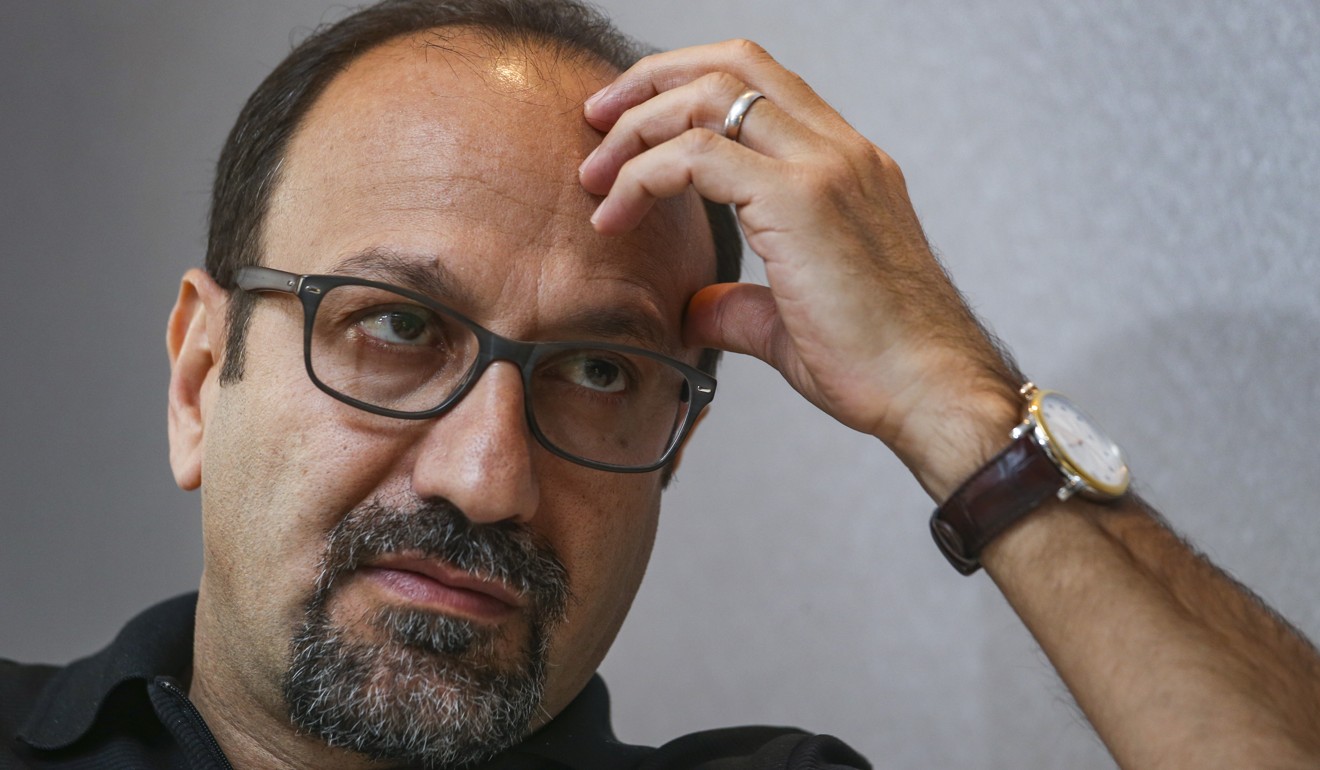 “There’s always phobias for a director who … makes films in a different country,” Asghar Farhadi says. Photo: (SCMP)
Ironically, the restrictive climate for filming in Iran has been a blessing for Farhadi. While he has regularly won awards since making his feature debut, Dancing in the Dust, in 2003, it is films shot in Iran that have earned the best reception from international critics and fans. A Separation remains the highest-grossing Iranian film in history.

“This is true,” Farhadi says when the pattern is brought up. “Naturally, the non-Iranian audiences would prefer me to make films back in Iran, because they think they could get to know Iran by watching these films. So I would try to make the majority of my films back in Iran rather than in other countries. But sometimes, I do feel that I need to experience and do something that is unexpected for others.

“There is another point that I would like to make,” he adds. “Everybody Knows is only my second experience in a non-Iranian context. But A Separation was the fifth one made in Iran. The comparison between these two films might not be right.” 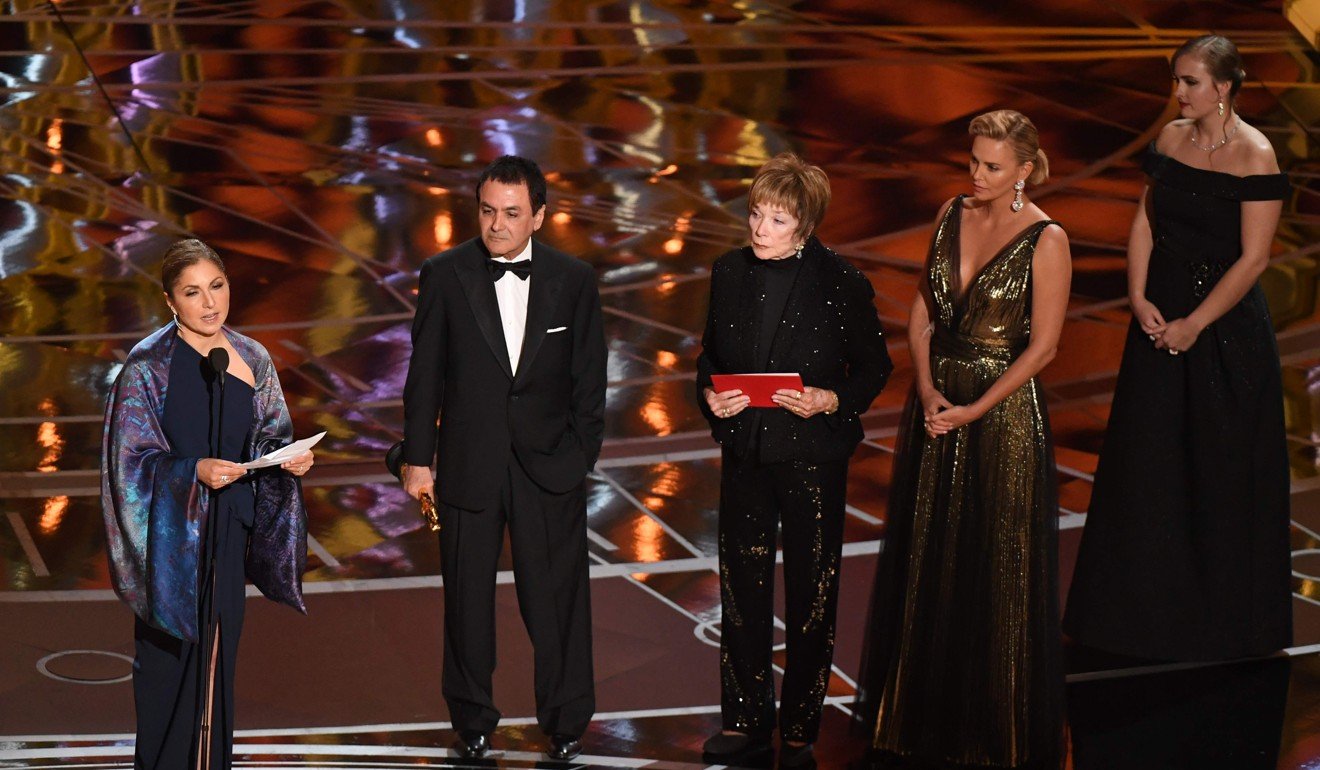 Iranian-US engineer Anousheh Ansari (left) delivers a speech on behalf of Asghar Farhadi after his film The Salesman won the Oscar for best foreign language film at the Academy Awards in 2017. Actresses Charlize Theron (second from right) and Shirley MacLaine (centre) look on. (AFP)
When it’s suggested we should expect a major hit with his fifth non-Iranian film, Farhadi laughs.

“Maybe. We don’t know,” he says. “But there’s always phobias for a director who steps outside his own country and make films in a different country.”

Even as he says this, Farhadi is in talks to shoot another film overseas – which would be the first he hasn’t also scripted – as well as one set in Iran for which he is writing the screenplay.

Occasionally, his mind turns to the two Oscars he has won, and to how they could ruin his craft.

“The Oscar wins have definitely influenced both my personal life and my professional life,” Farhadi says. “That said, I do always try to be the same director that I used to be before getting these awards.

“While the awards are very good for [the marketing of] the films themselves, they could also be dangerous for their directors, who might lose their way afterwards. I always think about this and I always try to remain cautious.”

Everybody Knows opens in Hong Kong on April 4.