Gen. Qassem Soleimani (C), who heads the elite Quds Force of Iran’s Revolutionary Guard attends a graduation ceremony of a group of the guard’s officers in Tehran,June 30, 2018. (AP)

The Israel Defense Forces on Sunday said the attack drones that Iran intended to use against the Jewish state on Saturday night had been flown into Syria from Tehran several weeks ago, along with Iranian military officials to act as advisers.

The statement by the military came as the death toll in the Israeli raids on Saturday night climbed to five, according to the British-based Syrian Observatory for Human Rights monitor.

“Each one of these attack drones would carry several kilograms of explosives,” he said.

Conricus said the military has been monitoring the Iranian plot for “a number of weeks.”

When the IDF spotted the Iran-led team — made up of the four IRGC advisers and Shiite militiamen — moving to launch the drones on Saturday night, the Israeli Air Force took action and bombed their base.

“Thanks to a substantial intelligence effort, an Iranian attack was thwarted and harm to Israel was prevented,” the head of Military Intelligence Tamir Heyman said in a statement.

Conricus said forces had been put on high alert near the Syrian frontier after the attack.

The Syrian Observatory for Human Rights monitor said an Iranian combatant and two fighters for the Lebanese terror group Hezbollah were among the fatalities in the strike, along with at least two others whose identities are not yet known.

“The person who led this attack and commanded it was Qassem Soleimani personally. He funded, coached and trained Shiite operatives, who were supposed to carry it out,” Kohavi said in a video of a meeting in the IDF Northern Command late Saturday night, released by the military. The army chief warned that the military must “prepare for any eventuality,” as Iran may retaliate for the Israeli strikes.

“We will [prepare] in the best way possible,” he said. 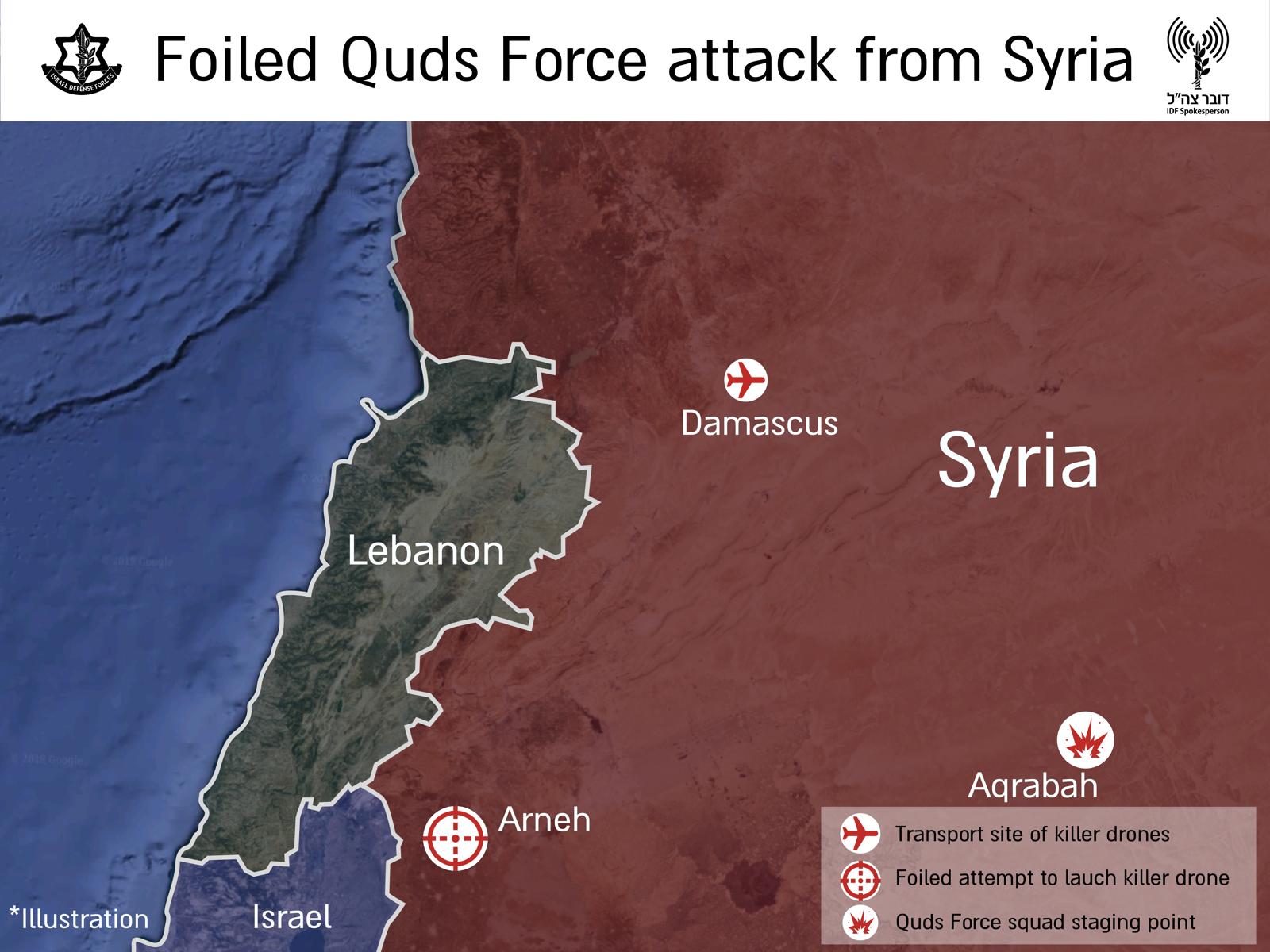 An illustrative map showing the locations from which the Israeli military says Iran tried to launch explosive-laden drones into northern Israel from Syria in August 2019. (Israel Defense Forces)

On Sunday afternoon, the IDF released a satellite image of the Iran-backed team’s base of operations in the village of Aqrabah, east of Damascus, as well as an illustrative map showing the approximate locations of the Iranian cell’s activities.

Last Thursday, the Quds Force-backed cell first tried to fly these attack drones into northern Israel from the Syrian village Erneh, near the Israeli Golan Heights, but this effort was blocked by the Israeli military, the IDF spokesman said.

Conricus refused to comment on the exact method used Thursday to thwart the attack, but said it was “not necessarily kinetic,” which appeared to indicate that some method of electronic warfare was employed.

According to the spokesman, the Iranian drones used in the attack were of the same variety that Tehran-backed militias have used elsewhere in the Middle East, namely Yemen’s Houthis.

“The modus operandi is similar to what we have seen in other places in the Middle East — in Yemen and Saudi Arabia,” Conricus said. 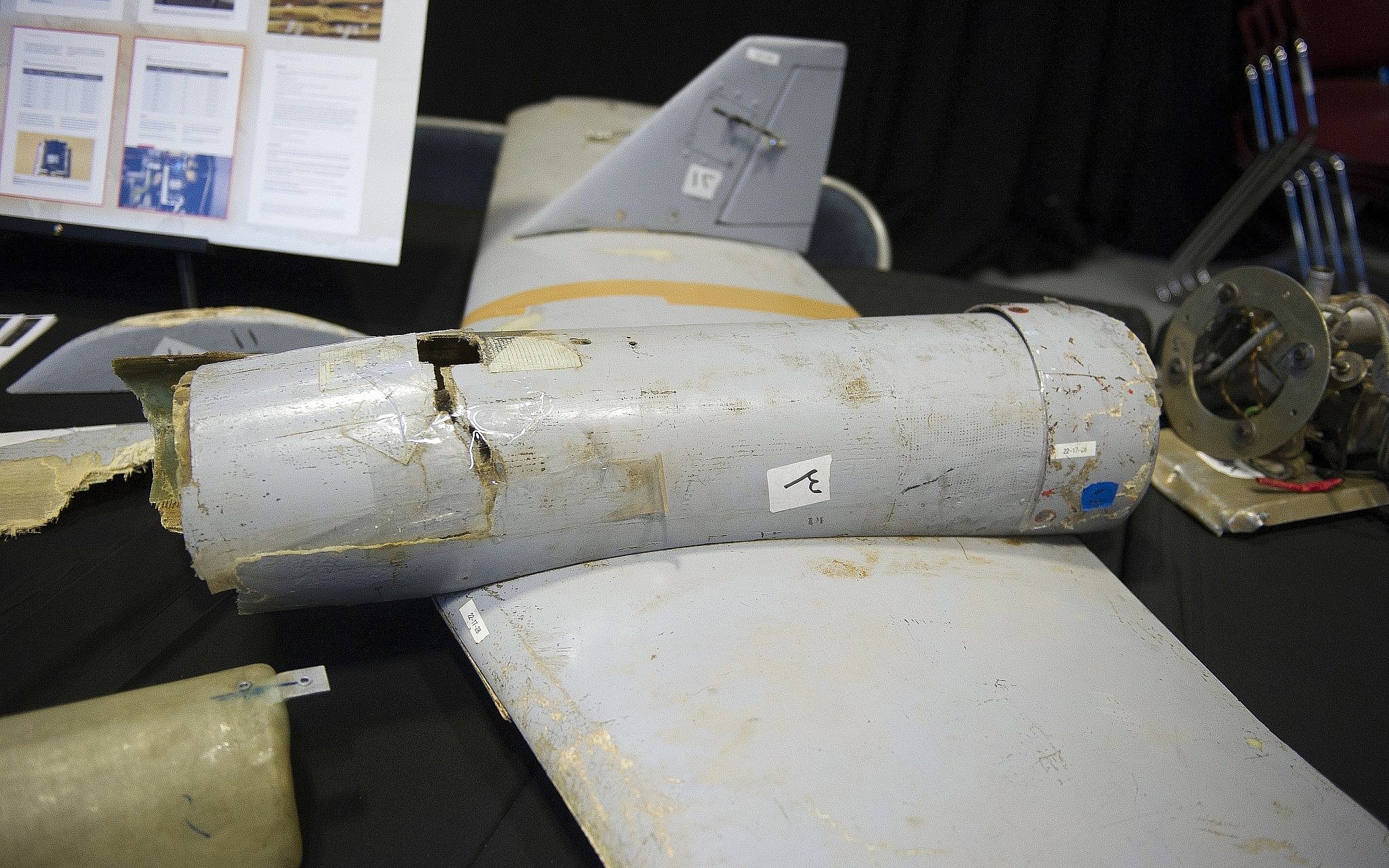 The remains of an Iranian Qasef-1 Unmanned Aerial Vehicle, used as a one-way attack UAV to dive on targets and then detonating its warhead, which was fired by Yemen’s Iran-backed Houthi rebels into Saudi Arabia. (AP)

He said the equipment, as well as the IRGC advisers, were flown in from Tehran through the international airport of Damascus several weeks ago.

According to Conricus, the team was directed by senior officials in the IRGC, including its commander Qassem Soleimani.

“An intelligence effort exposed the preparations of the force led by Soleimani, in an Iranian structure near Damascus and made possible the thwarting of the attack. The Quds Force is continuing its efforts to destabilize the region. We are continuing our effort to stop the Quds Force’s attempts to harm Israel and her citizens,” Heyman said.

The Iranian-led team established a small fenced-off compound in Aqrabeh, where they stored the drones and explosive devices, and which also contained a swimming pool and garden.

According to Conricus, the “highly compartmentalized and secretive squad” put the compound under guard to ensure that Syrian civilians did not try to enter.

The IDF spokesman said Israel sees Syrian dictator Bashar Assad’s regime as responsible for the attacks as it was aware of the plot and gave it de facto support by allowing it to take place.

In a statement issued just minutes after the Israeli army announced its attack, Prime Minister Benjamin Netanyahu hailed the military’s “major operational effort” in thwarting the attack planned by “the Iranian Quds force and Shiite militias.”

“Iran has no immunity anywhere,” Netanyahu said. “Our forces operate in every sector against the Iranian aggression. I have directed that our forces be prepared for any scenario. We will continue to take determined and responsible action against Iran and its proxies for the security of Israel.”

“Israel and the United States do not have the power to attack Iran’s various centers, and our [military] advisory centers have not been harmed,” Mohsen Rezaei, who is also secretary of Iran’s Expediency Council, a powerful state body, told the semi-official ILNA news agency on Sunday.

The late-night airstrike, which triggered Syrian anti-aircraft fire, appeared to be one of the most intense attacks by Israeli forces on Iranian targets in Syria.

Netanyahu, who is also defense minister, held a midnight emergency meeting at the Defense Ministry headquarters in Tel Aviv with IDF chief Aviv Kohavi and Mossad head Yossi Cohen, as well as other senior defense officials.

There have been few direct clashes between Israel and Iran in Syria. In May 2018, Israel said Iranian forces fired some 20 rockets at Israel, with most being shot down or failing to reach Israeli territory. In response, Israel carried out extensive airstrikes on Iranian positions in Syria.

While Israel has acknowledged carrying out thousands of airstrikes inside Syria against weapons transfers to Iran-backed fighters and to keep Iran from gaining a foothold there, it rarely acknowledges individual strikes.

The ambiguity is part of a strategy seen as helping give Tehran and Damascus cover from needing to strike back to save face. Israel has appeared to apply the same strategy in Iraq, where the IDF has been reported to have carried out a number of strikes on Iran-backed militia