A senior commander in Iran’s elite Islamic Revolutionary Guards Corps threatened on Monday to destroy two of Israeli’s largest cities if the country is attacked by the United States.

“The United States does not have the courage to shoot a single bullet at us despite all its defensive and military assets. But if they attack us, we will raze Tel Aviv and Haifa to the ground,” Brig. Gen. Yadollah Javani was quoted as saying by state news agency IRNA, according to Reuters.

Top political and military leaders in Iran regularly call for Israel’s annihilation, with a senior general recently claiming it would defeat the Jewish state “within three days” in the case of a war.

Javani, the deputy for the IRGC political bureau, was speaking at a rally marking the 40th anniversary of the Islamic Revolution, when the US-backed monarchy was overthrown and replaced in power by Islamic fundamentalists.

Along with the chants “Death to America” and banners bearing slogans calling for “Death to Israel,” Monday’s marches were also a backdrop to the military’s display of Iranian-made missiles, which authorities showcase every year during anniversary celebrations.

In Tehran, crowds streamed in the rain from a dozen of the capital’s far-flung neighborhoods to mass in central Tehran Azadi, or Freedom Square, on Monday, waving Iranian flags and chanting “Death to America” — a chant that has been standard fare at anti-U.S. rallies across Iran.

Chants of “Death to Israel” and “Death to Britain” followed, and demonstrators burned U.S. and Israeli flags. Iranian state TV, which said millions participated in the celebrations, ran archive footage of the days of the uprising and played revolutionary songs. It later broadcast footage showing crowds across this country of 80 million. 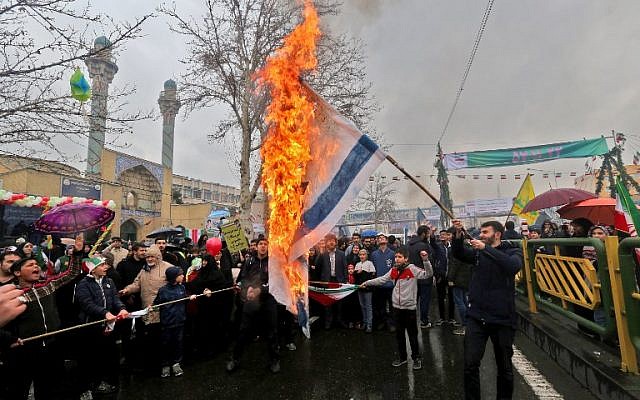 Iranians burn Israeli flags during commemorations in the capital Tehran of the 40th anniversary of the Islamic Revolution on February 11, 2019. (AFP)

Despite mounting international pressure over the country’s missile program, Iranian President Hassan Rouhani vowed to continue to push the development of such weapons.

“We do not and we will not ask permission for producing any type of missiles from anybody,” Rouhani said from Tehran Monday, though he stressed that Iran would “continue constructive engagement” with the international community.

Rouhani addressed the crowds for nearly 45 minutes, lashing out at Iran’s enemies — America and Israel — and claiming their efforts to “bring down” Iranians through sanctions will not succeed.

“The presence of people in this celebration means that plots by the enemies … have been defused,” Rouhani said. “They will not achieve their ill-omened aims.”

Earlier this month the US vowed to pressure Iran to curtail its missile program after the Islamic Republic unveiled a new ballistic missile with a range of 1,000 kilometers (620 miles) and tested a new cruise missile, both capable of reaching targets in Israel.

Israeli television reported last week that Israel has discovered a new ambitious precision missile factory being constructed by Iran in Syria together with the Syrian government and Lebanese terror group Hezbollah, after Israel bombed and destroyed a previous one.

According to Channel 12 news, the factory is intended to focus on producing precision missiles, dramatically upgrading the threat to Israel from the vast arsenal of rockets and missiles deployed against it in southern Lebanon by Iran’s proxy, Hezbollah.

Despite Iran’s efforts to conceal the facility, Israel has nevertheless discovered, tracked and uncovered it, the network said, as part of its effort to thwart Iran’s military entrenchment in Syria.

Israel says it has carried out hundreds of airstrikes on Iranian-linked targets as part of a campaign to prevent Tehran from establishing a military presence in Syria.