Employees walk past flames rising from the burning of excess natural gas at the Bin Omar natural gas station,  north of the southern Iraqi port of Basra on January 12, 2017. (AFP)

The Trump administration is pressuring Iraq to stop buying energy from its neighbor and sole foreign supplier, Iran, in what has become a major point of conflict between Washington and Baghdad.

Iraqi leaders, fearing that a further shortfall in power would lead to mass protests and political instability in their electricity-starved country, are pushing back on the demand, which is rooted in President Trump’s sanctions against Iran.

The dispute has frayed American diplomacy with Baghdad as Iraq tries to steady itself after the United States military withdrawal in 2011 and the campaign against the Islamic State.

Iraq’s defiance further jeopardizes Mr. Trump’s goal of getting all nations to comply with sanctions after withdrawing from the deal to limit Tehran’s nuclear program last year. Already, European nations have set up a legal financial mechanism to do business with Iran, and China and India are resisting American efforts at prodding them to cut off oil purchases. Tensions rose after Mr. Trump said on Feb. 3 that he planned to have American troops who have returned to Iraq “watch Iran,” despite Baghdad’s need to maintain cordial ties with its fellow Shiite neighbor. Mr. Trump’s comments added momentum to proposed legislation in Iraq that would limit the movement and activities of American troops.

“The people of Iraq have suffered from the blockade and are aware of the harm done to the people by their actions,” Prime Minister Adel Abdul Mahdi of Iraq said last week after a meeting with the governor of Iran’s central bank, Abdolnaser Hemmati. He was referring to 13 years of crippling sanctions imposed on Iraq by the United States when Saddam Hussein was in power.

“Iraq will not be part of the sanctions regime against Iran and any other people,” Mr. Abdul Mahdi said.

Mr. Hemmati said he hoped Iraq and Iran would cooperate more in banking, which could also weaken American sanctions.

American officials are seeking to cut off Iraqi purchases of natural gas and electricity, even though the country relies on those for a good portion of its energy needs.

Iraq’s energy production and grid capabilities have lagged since the American-led invasion of 2003, and blackouts in cities are common, even with the current purchases. The energy shortfall is especially acute in the sweltering summers, which has led to large protests that become national crises.

Iranian natural gas is the single most critical energy import in Iraq, but American officials say purchases must end now because gas falls under the American sanctions.

And the Trump administration has told Iraq’s leaders that they have until late March to end electricity purchases, amounting to about 1.2 gigawatts. Officials in Baghdad say there is no easy substitute for either one because it would take three years or more to adequately build up Iraq’s energy infrastructure. 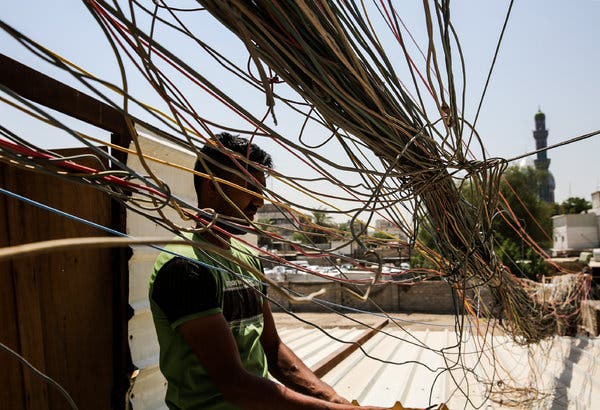 Iraq’s energy production and electric grid capabilities have lagged since the American-led invasion in 2003. (AFP)

The Trump administration’s push on Iraq is part of its strategy of using sanctions to weaken Iran’s economy and prompt political or policy change. Administration officials aim to coerce Iranian leaders to fully dismantle their nuclear and ballistic missile programs and curb their support for Shiite Arab militias in the Middle East.

American officials say they want to get Iranian oil exports to zero, but they gave leeway to some countries when imposing sanctions in November. The State Department and Treasury granted waivers to eight countries, including China and India, Iran’s two biggest customers, to allow continued purchases for 180 days.

Iraq was given a 45-day waiver on electricity, which was extended by 90 days in December. On Jan. 9, Secretary of State Mike Pompeo spoke to Iraq’s two top leaders in Baghdad about “energy independence,” a State Department spokesman said.

Iraqi officials said the American demand acknowledges neither Iraq’s energy needs nor the complex relations between Baghdad and Tehran.

Haider al-Abadi, the former prime minister, said in an interview that Iraq was in a precarious situation with the United States because “we cannot afford to make them angry.” But, he said, the Americans have failed to “look at the geopolitics of Iraq.”

The defiance by Iraqi leaders underscores the lack of support among many nations for the sanctions and the American goal of crippling Iran’s government. Analysts say they do not expect China and India to stop their purchases of Iranian oil even after the 180-day waivers expire. On Jan. 31, Britain, France and Germany announced a mechanism to allow countries to do business with Iran in a way that does not violate sanctions.

This week, diplomats from dozens of countries will meet in Warsaw for what American officials originally billed as a discussion of the Iran sanctions and containment strategy. But Western European nations balked at the focus on Iran and threatened to send lower-level officials, forcing the State Department to broaden the theme to addressing instability in the Middle East.

Inside Iran, the sanctions have led to a scarcity of medicine, adding to global criticism of the American policy.

Last month, top American intelligence officials contradicted Mr. Trump by saying Iran was not currently taking steps to make a nuclear bomb. Those officials and the International Atomic Energy Agency say Iran still appears to be complying with the nuclear dealfrom which Mr. Trump withdrew the United States in May.

Iraq presents a special dilemma for the United States. The toppling of Hussein in 2003 allowed Iran to become the dominant foreign power in Iraq. That has continued throughout the Iraqi government’s campaign against the Islamic State, with Iran supporting Shiite Arab militias against the Sunni extremist group and sending top commanders into battle, including Maj. Gen. Qassim Suleimani, a nemesis of the Americans.

Iraqi officials want to someday produce all their energy. But until the proper infrastructure is built, they see no alternative to buying from Iran, said Meghan O’Sullivan, an energy scholar and Harvard Kennedy School professor who was a top National Security Council official on Iraq under President George W. Bush.

“The administration’s policy is putting Iraq in a tough position,” said Ms. O’Sullivan, who has spoken with Iraqi and American officials about the American demands. “The big transition that the Trump administration wants Iraq to make in stepping away from Iran will take a long time.”

“It makes sense for Iraq to supply all of its own energy and to export products,” she added. “It’s not a crazy idea from the Trump administration. But the sanctions are adding urgency to the situation and political complications.”

Iraqi officials have also expressed concern over demands from the Trump administration to sign deals with American companies to build up energy infrastructure.

Last October, the Trump administration pushed Iraqi officials to sign agreements with General Electric for multibillion-dollar power generation deals, after Siemens A.G., a German company, had been on the verge of landing a $15 billion deal with Baghdad. Iraqi officials ended up signing nonbinding agreements with both companies.

Senior American officials had warned Mr. al-Abadi, then the prime minister, that signing the deal with Siemens would put Iraq’s relations with the United States at risk, Bloomberg News reported.

Iraq’s power sector suffers from many problems, including a poor grid and lack of fuel to be converted to electricity.

In 2017, Iraq signed a deal with Iran to import up to one billion cubic feet of natural gas daily, which would cost $2.8 billion annually at crude oil prices of $70 per barrel. The actual imports have been half that amount. The fuel accounts for 10 to 15 percent of Iraq’s electricity generation, according to the World Bank.

Even with that, Iraq has a shortfall of three gigawatts of power.

Last May, around the time Mr. Trump announced the withdrawal from the Iran nuclear deal, Iraqi officials stopped paying Iran for natural gas and electricity. That was in part because they feared the United States was about to impose sanctions, and their lawyers wanted to look at Iraq’s exposure, said a State Department official, who discussed details of the sensitive diplomatic issue on condition of anonymity.

Last July and August, having not been paid, Iran stopped electricity exports to Iraq. That contributed to widespread blackouts in the southern city Basra, already common during the summer, and helped ignite protests. Iran restarted exports on Aug. 20, but the protests continued, and some residents burned the Iranian Consulate in September.

Iran has since continued its exports of natural gas and electricity to Iraq and expects to be paid. Officials from both countries are negotiating how to make payments, given the American sanctions. The Trade Bank of Iraq could have sanctions placed on it by the United States if it buys natural gas or, under the temporary electricity waiver, pays for electricity in United States dollars, the State Department official said.

Iraqi officials met with Treasury Department officials in Washington twice in late 2018 to discuss how to legally make payments. A critical period will come this summer, when electricity demand will surge again. If Iran cuts supplies because of nonpayment, more protests could occur, destabilizing the country.

For a long-term solution, the Trump administration is urging Iraqi officials to connect their grid to Saudi Arabia, Jordan or Kuwait.

They are also pushing Baghdad to sign contracts with foreign companies for natural-gas capture, processing and transport to use gas that is lost during crude oil production. Iraq has 1.7 billion cubic feet of gas flaring per day across 30 fields. The World Bank has worked with the Oil Ministry for two years to improve legal and regulatory foundations for gas contracts.

But that is not a short-term fix for energy shortfalls, and Iraq has been slow in signing contracts. Last year, Iraq signed a single natural-gas processing contract, with Baker Hughes and General Electric. The product would equal only a fraction of the imports from Iran, and it would take at least two years to come online.