Home/Iraq, Syria/Airstrike on Iran-backed militia near Iraq-Syria border said to kill at least 5
Previous Next

Unknown aircraft attacked posts of Iranian-backed fighters in eastern Syria, near the Iraqi border, in the predawn hours of Thursday morning, killing at least five people, according to Arabic media reports.

It was the second strike on positions controlled by Shiite militias in the Boukamal region of Syria in as many days, and the third in a month. Some Syrian and Iraqi outlets said Israel was suspected of being behind the strikes. There were no such public allegations by Syrian or Iraqi officials.

According to the Britain-based Syrian Observatory for Human Rights, at least 10 pro-Iranian fighters were killed in an airstrike Tuesday by unmanned aerial vehicles, which reportedly targeted a training camp and ammunition storehouse.

The Observatory and activist collective Deir Ezzor 24 said the strikes occurred near a newly constructed, but not yet operational Syrian border crossing with Iraq. The opening of the crossing, planned by Iraq and Syria, had been postponed several times in recent weeks.

On September 9, aircraft targeted an arms depot and posts of Iranian-backed militias in the Boukamal region, killing at least 18 fighters and destroying at least eight storehouses. A Syrian security official said at the time that Israeli jets were behind the attack but denied there were casualties. 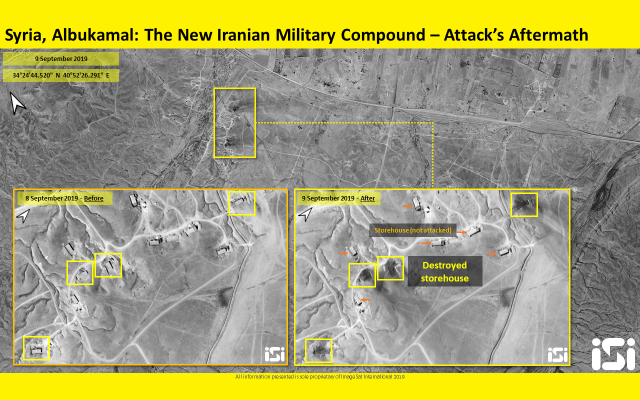 Satellite image showing the aftermath of an overnight airstrike on an alleged Iranian military base in Syria’s Boukamal region, near the Iraqi border, on September 9, 2019. (ImageSat International)

Since mid-July, seven arms depots and training camps belonging to the Popular Mobilization Forces have been targeted in apparent attacks.

The Saudi-owned Al Arabiya network has reported that the Lebanese Hezbollah terror group also maintains a presence in the Boukamal region.

The PMF has blamed both Israel and the US for the string of blasts and drone sightings at its bases. Israeli officials have not publicly commented on these allegations.