Although the big story on Monday morning was the allegation of continued Internet shenanigans by the disgraced New York City Democrat Andrew Weiner, the personal thorn in the side of his wife, Hillary Clinton-confidante Huma Abedin, reporters appear more fixated on the sexual proclivities of a has-been congressman than on the alleged Islamic terrorist connections of his wife.

American law enforcement officers appear to have been onto something when some of them claimed Hillary Clinton possessed ties to Islamic terrorist groups and even provided help to some of the most deadly fanatics in the world.

For example a Nigerian-Lebanese multi-billionaire Gilbert Chagoury continues to be suspected of not only financially supporting a radical Muslim super-jihadist group, but he’s also connected financially to presidential candidate – and former Secretary of State — Hillary Clinton. In fact, their relationship began during the administration of her husband, President Bill Clinton.

The multi-million dollar Clinton Foundation donor was denied entry into the U.S. last year because of his ties to a Lebanese-based organization to which he has allegedly given money. The group of terrorists known as Hezbollah were responsible for the killing of 240 U.S. Marines who had been posted in Beirut, Lebanon, during the Reagan Administration. They were killed in a large-scale terrorist bombing in what was once considered a beautiful and exotic metropolis. 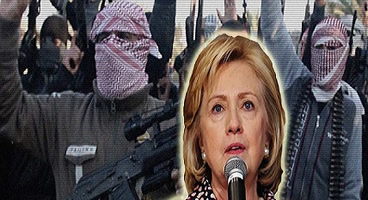 This latest news story is based on interviews and government documents including emails discovered that revealed in 2009 a Clinton Foundation “adviser” asked the State Department’s deputy chief of staff, Huma Abedin, for a favor on terrorism financier Chagoury’s behalf. Abedin is known as Hillary Clinton’s “Girl Friday,” and closest associate.

Chagoury isn’t the only person who donated money to the Clinton’s quasi-charity. Evidence exists – although it’s being ignored by the Obama Justice Department — that the Clinton Foundation operates as a massive pay-for-play scheme, a number of criminal investigators have told the Conservative Base. The Foundation itself, although listed and taxed as a charity, only uses about 10-15 percent of its donations to work that can be described as charitable.

“The fact a major Clinton Foundation donor was denied entry into the U.S. over ties to the terrorist group Hezbollah is deeply troubling, especially when this individual had access to top aides at Hillary Clinton’s State Department. These revelations are yet another example of why the Clinton Foundation must be shut down and Hillary Clinton must demand the State Department immediately release her official schedules in full before the election. Voters deserve to know just how badly compromised a Hillary Clinton presidency would be,” said Donald Trump’s Senior Communications Advisor Jason Miller

Since the President Bill Clinton Administration, Chagoury was able to cultivate a friendship with the Clinton family based on his writing big checks, including a $1 million to the already established Clinton Foundation.

When Hillary Clinton was confirmed as President Barack Obama’s Secretary of State, the Clinton-Chagoury friendship advanced to the point that Bill Clinton’s closest aide to pushed for Chagoury to meet with top U.S. diplomats, and the U.S. government is considering the construction of a multi-million-dollar consulate on Chagoury owned land in Lagos, Nigeria. While Chagoury is a known sponsor of Islamic terrorism, he has thus far not been tied to the Nigerian based Islamists known as Boko Haram.

What is also shocking is the fact that while meeting were held about the Nigerian consulate project, those involved in State Department security matters were probing certain accusations stemming from Chagoury’s unsavory affiliations and friendhips, At one point review, the State Department refused the issuance of a visa to enter the U.S. in 2015.

After Mrs. Clinton left the State Department, Chagoury again found himself under suspicion by U.S. security officials. A 2013 FBI intelligence report, citing unverified raw information from a source, claimed Chagoury had sent funds to Hezbollah. The source said he was “facilitating fundraising for Hezbollah.” The U.S. put Chagoury in its database used to screen travelers for possible links to terrorism, interagency memos show.

Unfortunately, the nation’s purveyors of “honest journalism” are too busy covering nonsense that they believe will hurt Hillary Clinton’s GOP opponent and they are turning a blind eye to the vast-Clinton-conspiracy.