Harassment and imprisonment: Life as a persecuted Christian in Iran

Home/Iran, Minorities/Harassment and imprisonment: Life as a persecuted Christian in Iran
Previous Next

Harassment and imprisonment: Life as a persecuted Christian in Iran

Iranian Christian Dabrina Tamraz advocated at the United Nations on behalf of Christians detained in her home country. (Supplied)

Dabrina Tamraz grew up as the daughter of a pastor living under the Iranian regime. Alongside church services and bible studies, her childhood memories are tainted by government surveillance, harassment, interrogation, and detention. In an exclusive interview with Al Arabiya English, Tamraz tells the story of life as a persecuted Christian in Iran.

“Our family was being followed all the time by Iranian authorities. They even broke into our house. We had spies within the church and at times soldiers standing in front of it. I was detained so many times I’ve lost track of the number,” said Dabrina Tamraz in an exclusive interview with Al Arabiya English.

For 40 years her father, Pastor Victor Tamraz, preached in spite of the persecution. He was frequently arrested and interrogated by Iranian authorities on Sundays just before his scheduled church service. The Tamraz family’s church, the Assyrian Pentecostal Church in Tehran, was shut down in 2009 for offering services in the national language of Farsi –prohibited for churches in Iran.

Now Tamraz’s father is banned from the pulpit. He was arrested in 2014, kept in solitary confinement for 65 days, and sentenced to a 10-year imprisonment for “conducting evangelism” and “illegal house church activities,” acts which the Iranian regime considers threats to national security. Tamraz’s mother was arrested for allegedly training church leaders and pastors to act as spies and is appealing a five-year prison sentence. Her brother was arrested for joining a house church and sentenced to a four-month term.

Their detention has drawn international attention to Iran’s persecution of religious minorities. US Vice President Mike Pence publicly called on the Iranian regime during a speech at the US State Department in July to release Tamraz’s father, saying the pastor was sentenced “on contrived charges” related to “his peaceful religious activities.” 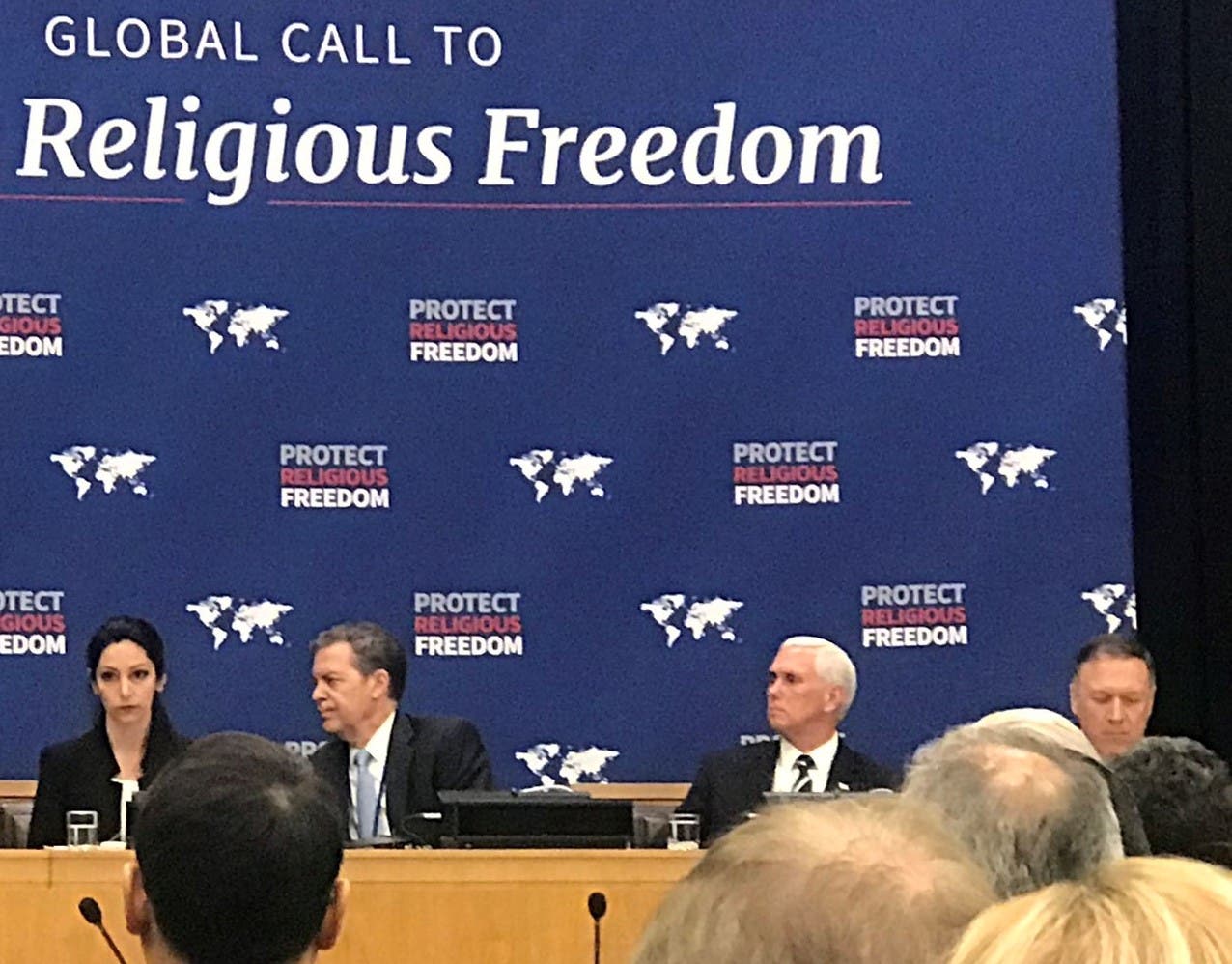 Dabrina Tamraz speaking alongside US Vice President Mike Pence and US Secretary of State Mike Pompeo at the United Nations Event on Religious Freedom on September 23.

Tamraz, who escaped Iran nine years ago and now lives in Europe, says her message to Iran’s leadership is to free detained Christians and drop the sentences of her family members.

“I would say to [Iran’s President Hassan] Rouhani that freedom of religion is a foundational right for all your citizens,” said Dabrina Tamraz.

The constitution of Iran recognizes Shi’i Islam as the official religion. It states that Christians, Jews, and Zoroastrians are protected religious minorities free to perform their rites “within the limits of the law.”

But the law comes with many limits. While Iran is home to nearly 300,000 Christians, this population is not free to worship, observe, practice, or teach their faith.

According to the US Commission on International Religious Freedom’s 2019 report, the Iranian regime sentences Christians to prison terms for holding private Christmas gatherings, organizing and conducting house churches, and constructing and renovating houses of worship.

The report, which mentions the persecution of the Tamraz family, found there has been a dramatic uptick in arrests of Christians. At least 171 Christians were arrested in 2018. Over 40 have been arrested this year.

“As Christians we are seen as cooperating with America to take the throne from Iran. This is something they [the authorities] say,” said Tamraz.

Iran’s government denies that religious minorities face repression. Rouhani has claimed that “Christians have the same rights as others do,” according to Iran’s official IRNA news agency. This year President Rouhani publicly congratulated Iranian Christians on their New Year. Meanwhile authorities were cracking down on the Christian community in Iran. In the first week of December alone, 114 Christians were arrested in Iran.

Iran has repeatedly arrested Christians ahead of the holiday season. The Tamraz family’s house was raided by Iranian security officers during a Christmas celebration in 2014. The officers arrested all attendees, seized their Bibles and confiscated personal items. The participants signed forms committing to never gather together again.

Tamraz says she feels devastated thinking about her family and Christians in Iran, but is grateful to US President Donald Trump and his administration for being “a loud voice” in raising awareness about their persecution.

“America has an influence on Iran and can effect change. I’m aware that Trump administration officials are mentioning cases of Christian persecution in Iran in their negotiations. Religious freedom is a topic of focus for President Trump,” said Tamraz.

Tamraz met with Trump in the White House in July, alongside 27 survivors of religious persecution from all over the world, and asked the president to raise the issue facing her family and other Christians in Iran. Trump said he would, and has recently raised the issue of religious freedom publicly. 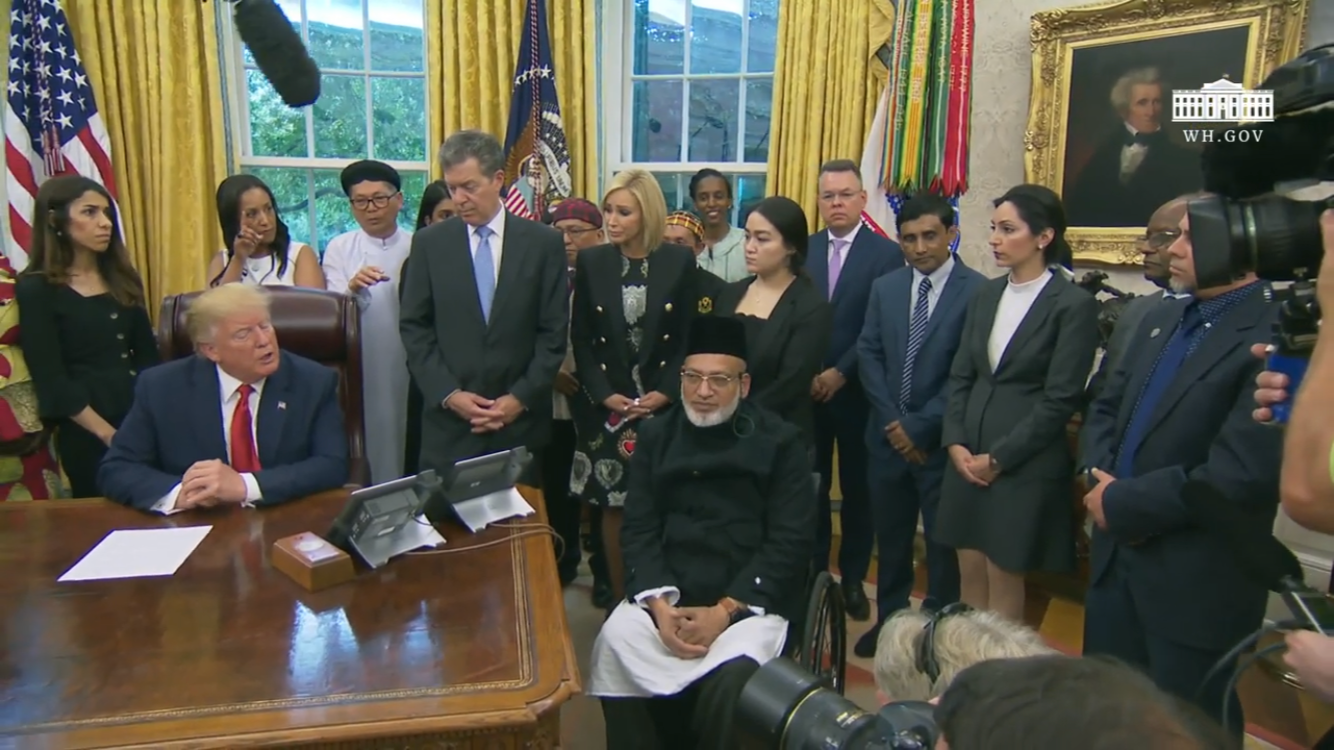 Dabrina Tamraz speaking with US President Donald Trump in the Oval Office on July 17.

“This fundamental right is under growing threat around the world. Americans will never tire in our effort to defend and promote freedom of worship and religion. We want and support religious liberty for all,” said Trump.

Trump said that one “ironclad American commitment” is to protect religious leaders. Tamraz herself is now a religious leader; following in her father’s legacy she became a Christian pastor, but in Europe, where she does not face imprisonment.

She said that she still holds out hope for religious freedom in her home country of Iran.

“It’s not a big hope, but I do have hope. Otherwise I wouldn’t be doing what I’m doing in speaking out. I trust that God is working, doing signs and wonders in Iran, despite the persecution,” she said.