A girl looks at Christmas trees as she and her mother walk past Christmas decorations in central Tehran, Dec. 13, 2011. (Reuters)

The Iranian regime has begun cracking down on evangelical Christians in Iran in the run-up to Christmas, experts and Iranian Christians said.

Security officials routinely arrest Christian citizens during the Christmas season, according to the 2019 US Commission for International Religious Freedom report, which found the regime arrested 114 Christians during the first week of December in 2018.

Authorities started to arrest Christians last week, said Dabrina Tamraz, who suffered persecution as an evangelical Christian in Iran. “Christmas celebrations make it easier for Iranian authorities to arrest a group of Christians at one time,” said Tamraz, who escaped Iran nine years ago and now lives in Europe.

Tamraz shed light on the harassment evangelical Christians in Iran are facing today, recounting details of how authorities raided her family’s Christmas gathering in Tehran in 2014.

“My brother opened the door only to be confronted with about 30 plain clothes officers who pushed their way in. They separated men from women and conducted strip body searches. Three people, including my father, were arrested and charged with acting against national security and conducting evangelism,” said Tamraz, whose father is an evangelical pastor.

Their treatment is just one example of the Iranian regime’s intolerance towards religious minorities – Baha’i’s, Christians, and others – who are frequently subject to harassment, detention and even execution, despite being recognized as protected religious minorities free to perform their rites “within the limits of the law,” according to Iran’s constitution.

US Secretary of State Mike Pompeo said in July that “the regime’s crackdown on Baha’ís, Christians and others continues to shock the conscience.”

The Iranian government considers evangelism – the sharing of the Christian faith – a criminal act.

Christians cannot pray or sing in public in Iran because the acts are considered illegal, according to Nina Shea, an expert in religious freedom at the Hudson Institute.

“The regime wants to intimidate Christians not to celebrate their religion, act on their religion, or have any outward signs of it, like wearing a cross,” Shea, who served on the US Commission on International Religious Freedom for over a decade, told Al Arabiya English.

Marina Nemat, an Iranian Catholic arrested and detained for being politically active in Iran following the 1979 revolution, told Al Arabiya English that Iran was “allergic to people converting and people evangelizing.”

Christian evangelicals and converts are specific targets of the regime, according to Tamraz and Nemat.

“If you are a Christian in Iran and do not evangelize, and do not advertise your religion, you will not go to jail. Christians that do go to jail in Iran are converts or evangelizing. Historically Christians are known to evangelize. This is what makes them a threat,” said Nemat in an interview with Al Arabiya English. 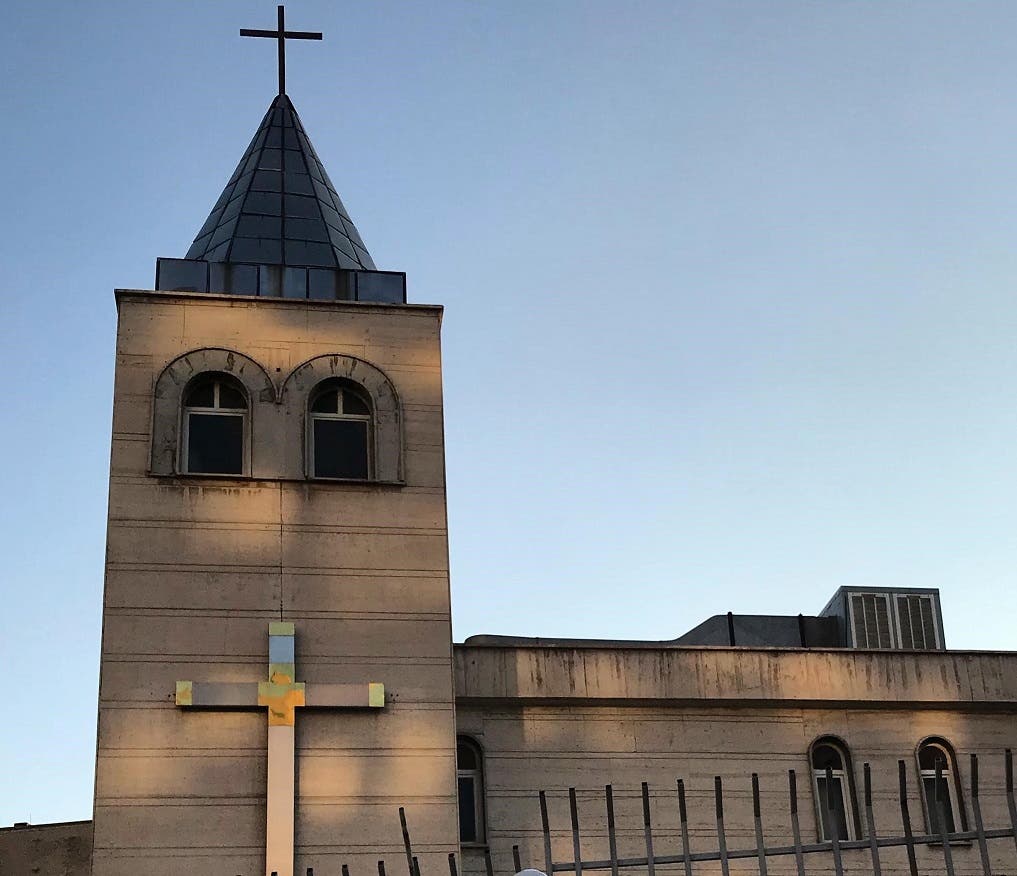 The Assyrian Assemblies of God church in Tehran, Iran. (Supplied)

While evangelical churches may be the chief targets of the regime, any church within the various denominations of Iran’s 300,000 Christians, is susceptible to harassment, according to Shea.

“Christian evangelicals are unprotected and vulnerable to mass arrests. But even the recognized churches may be raided, due to the mixing of the sexes during services or having alcohol as part of the ceremony,” said Shea.

According to the US Commission on International Religious Freedom’s 2019 report, the Iranian regime sentences Christians to prison terms for holding private Christmas gatherings, organizing and conducting house churches, and constructing and renovating houses of worship.

Tamraz, who spoke out on behalf of Iranian Christians at this year’s United Nations event on religious freedom, said Christians around the world should take courage from the strong faith of Christians in Iran.

“We should pray for them and take courage by their faith. Despite the arrests and persecution and high pressure from the government, Christians still gather and celebrate the birth of Christ and do not allow the government to create fear,” said Tamraz.