Iran denounces US ‘interference’ as Cuba rocked by rare protests

Iran denounces US ‘interference’ as Cuba rocked by rare protests

Protesters shut down part of the Palmetto Expressway as they show their support for anti-government protesters in Cuba, on July 13, 2021, in Miami, Florida. (AFP)

US foe Iran has accused the United States of “interference” in Cuba’s internal affairs after unprecedented protests hit the communist-ruled island which has been under US sanctions for decades.

The protests erupted spontaneously in several cities on Sunday as Cuba endures its worst economic crisis in 30 years, with chronic shortages of electricity, food and medicines.

“While the United States is primarily responsible for the numerous problems of Cuba’s people, it has now come out in support of Cuba’s protests,” foreign ministry spokesman Saeed Khatibzadeh said in a statement late Tuesday.

He accused Washington of “seeking to interfere in the country’s internal affairs” and said Tehran, also under punishing US sanctions, “expresses solidarity with the people and government of Cuba.”

One person died and more than 100 others, including independent journalists and dissidents, were arrested during the protests, with some remaining in custody on Tuesday, observers and activists said.

Havana, under US sanctions since 1962, has blamed the show of discontent on Washington pursuing a “policy of economic suffocation to provoke social unrest.” 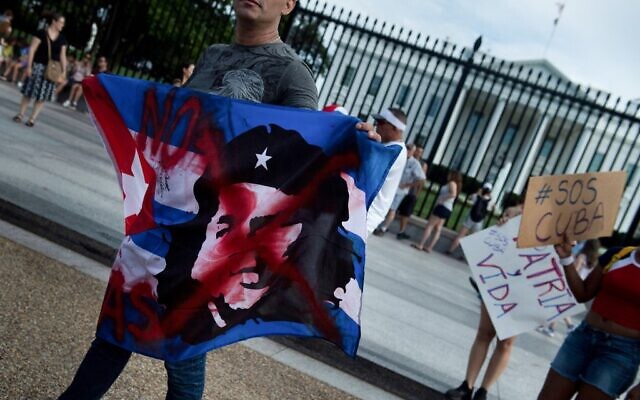 People supporting the anti-government protests in Cuba rally outside the White House in Washington on July 13, 2021. (AFP)

Since the Islamic Revolution toppled the US-backed shah in 1979, Iran and Cuba have routinely given each other diplomatic support, with the Islamic Republic condemning the US embargo against Cuba and Havana supporting Tehran’s right to civil nuclear power.