In front of portraits of supreme leader Khamenei, right, and late revolutionary founder Khomeini, left, a long-range missile system is displayed by Iran’s army during a military parade held just outside the city of Tehran on Sept. 21, 2017. (AP)

Iran has equipped its most advanced, longest-range missiles, which can hit Israel and US bases in the Gulf, with new precision guided warheads, state media reported Sunday.

According to the unsourced report in the Fars news agency, the new home-made guided warheads have now been attached to the Khoramshahr, a missile with a range of 2,000 kilometers (1,250 miles.)

“The new generation of missiles with guided warheads has been named Khoramshahr 2 and they can be controlled until hitting the target and are able to carry warheads weighing nearly 2 tons,” the report said.

It said that the new warheads had previously been mounted on the shorter range Emad, Qadr and Qiam missiles.

The first generation of Khoramshahr was unveiled in 2017.  Iran says all of its missiles are designed to carry conventional warheads only and has limited their range to a maximum of 2,000 kilometers, although commanders say they have the technology to go further.

That makes them only medium-range but still sufficient to reach Israel or US bases in the Gulf.

The report comes a day after Iran said it had successfully fired a new long-range cruise missile, amid events marking 40 years since the 1979 Islamic Revolution.

The missile, dubbed Hoveyzeh, was described as a high-precision weapon capable of flying at low altitudes and able to carry a significant payload up to a distance of 1,200 kilometers (840 miles.)

Iran has been known to exaggerate the capabilities of its weaponry, and there was no independent confirmation of Tehran’s claims.

In December, US Secretary of State Mike Pompeo accused Iran of testing a medium-range ballistic missile capable of “carrying multiple warheads,” which he said could strike “anywhere” in the Middle East and even parts of Europe.

“As we have been warning for some time, Iran’s missile testing and missile proliferation is growing. We are accumulating risk of escalation in the region if we fail to restore deterrence,” Pompeo said.

He also called on Iran to “cease immediately all activities” related to the development of ballistic missiles designed to carry nuclear warheads.

The statement from Pompeo came just days after a top Iranian general claimed US military personnel and assets in the Middle East are within range of his country’s missiles.

Amirali Hajizadeh, the head of the air division for the hard-line Islamic Revolutionary Guards Corps, said improvements to Iran’s missile arsenal had put US bases in Qatar, the UAE, and Afghanistan within reach, as well as US aircraft carriers stationed in the Persian Gulf, according to Iran’s Tasnim news agency.

“They are within our reach and we can hit them if the [Americans] make a move,” he said, according to a translation of his remarks carried by Reuters. 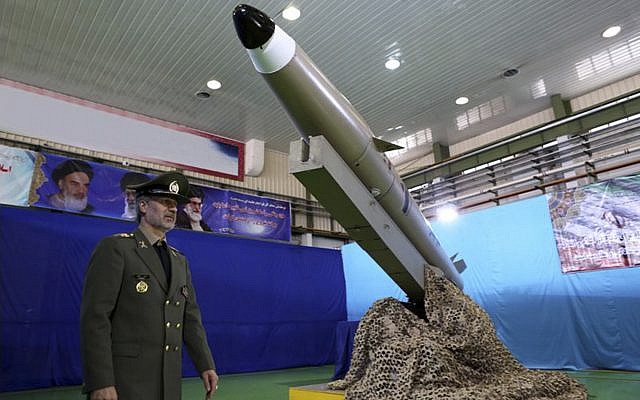 In this picture released by the official website of the Iranian Defense Ministry on Aug. 13, 2018, Defense Minister Gen. Amir Hatami walks past the missile Fateh-e Mobin, or Bright Conqueror, during inauguration of its production line at an undisclosed location, Iran. (AP)

Hajizadeh said the missiles had been outfitted with improved precision capabilities, making it possible to hit targets over 500 kilometers away to within 30 meters accuracy.

Although there are no restrictions in place on the range of Iranian missiles, US President Donald Trump had insisted that limitations be placed on Tehran’s missile program, as a prerequisite for Washington remaining in the landmark 2015 nuclear deal with Iran. He ultimately pulled out of it on May 12.

The US and its allies have been demanding that Iran curb its production of ballistic missiles, which can reach parts of Europe and could soon reach the US as well. Western officials have maintained that the only reason Tehran could have for manufacturing such missiles would be to fit them with non-conventional, including atomic, warheads.

Tehran, which calls for the destruction of Israel, insists that it sees the missile program as crucial to its defensive posture, and says its existence is non-negotiable. It has also maintained that it never intended to develop nuclear weapons and therefore its missile development does not violate the agreement. 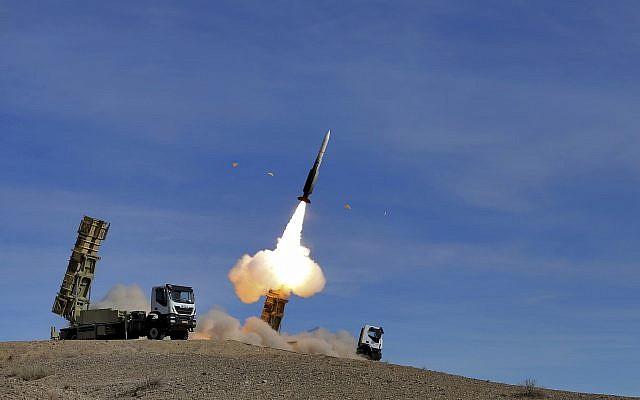 In this photo provided November 5, 2018, by the Iranian Army, a Sayyad 2 missile is fired by the Talash air defense system during drills in an undisclosed location in Iran. (AP)

However, Prime Minister Benjamin Netanyahu has presented evidence which he says details Iranian efforts and research programs specifically aimed at producing atomic weapons. In a Mossad operation, Israel earlier this year spirited out a trove of Iranian documentation from Tehran’s nuclear weapons archive, which Netanyahu said proved conclusively that Iran is lying when it says it has not been working toward a nuclear weapons arsenal.