Iran to hold major drill in southern waters, as a ‘warning to enemies’

Home/Middle East, North America, USA/Iran to hold major drill in southern waters, as a ‘warning to enemies’
Previous Next

Iran to hold major drill in southern waters, as a ‘warning to enemies’

An Iranian naval drill off the Strait of Hormuz, Aug 2017. (Tasnim)

The Iranian military announced it would begin Sunday a large-scale exercise in the Gulf of Oman, the northern part of the Indian Ocean, and in sections of the Red Sea, according to the semi-official Tasnim news agency.

The news agency quoted Adm. Habibollah Sayyari, Iran’s deputy army chief, as saying the drill will be a demonstration of Iran’s power at sea, “warning the enemies that any act of aggression against Iran will draw a crushing response from the army.”

The drill, dubbed “Zolfaqar-1400,” will involve forces from the Iranian Army Ground Forces, Navy, Air Force, and Air Defense units, Sayyari said in a press conference Saturday, according to Tasnim.

It is expected to cover an area of over one million square kilometers (386,102 square miles) southeast of Iran, stretching from the eastern side of the Strait of Hormuz to the northern part of the Indian Ocean, as well as part of the Red Sea, the army general said.

It was not clear what areas in the Red Sea would be included in the exercise.

Locally-produced equipment and ammunition, including “advanced reconnaissance and combat drones with various ranges,” are to be used in the drill, the news agency quoted Sayyari as saying. 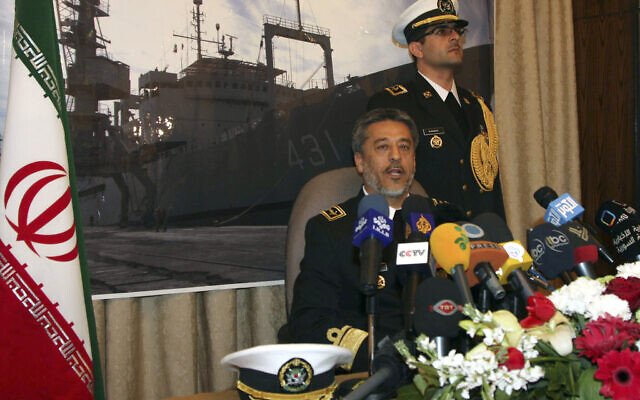 The general stated that the drill is also aimed at raising the combat and defense capabilities of the various units “for protecting the country’s territorial integrity,” according to Tasnim.

Iran regularly holds such drills and says they assess the troops’ combat readiness and demonstrate the nation’s military capabilities.

The region remains on edge over Iran’s escalating nuclear program.

The 2015 nuclear deal saw Tehran drastically limit its enrichment of uranium in exchange for the lifting of economic sanctions. In 2018, then-United States president Donald Trump unilaterally withdrew America from the accord, raising tensions across the wider Middle East.

Sunday’s drill comes as nuclear negotiations between Iran and world powers are to resume on November 29.

Iran has breached limits set by the nuclear deal and is enriching small amounts of uranium to its closest-ever levels to weapons-grade purity as its stockpile continues to grow. Iran claims its nuclear program is only for peaceful purposes.

Talks began in April in Vienna between Tehran and the remaining five parties to the 2015 deal, aimed at bringing Washington back into the agreement. But that dialogue has been stalled since the sixth round of talks in June, when ultraconservative Ebrahim Raisi won Iran’s presidential election.