Ismael Djidah in Beirut, believed to be on the seafront in the Al Manara district in September 2017. (Supplied)

The rebel from central Africa touched down on Kish Island, an Iranian resort in the Persian Gulf, and left the following day. His stopover was brief but had opened up a new front in the escalating crisis between Iran and the West.

Ismael Djidah was a well-connected middleman whose associates included some of the most notorious insurgents, mercenaries and arms smugglers from the war-torn borderlands of Chad, Sudan and the Central African Republic (CAR).

According to UN investigators, security officials and diplomatic sources — as well as Djidah’s own testimony — he was planning to set up terrorist cells in Africa under the direction of Iran’s elite Quds Force, commanded by Qassem Suleimani who was assassinated in a US drone strike a little over a week ago. Kish Island appears to be where the plan was hatched.

Known as the “Zahraa Brigade” and reportedly financed by hundreds of thousands of dollars, the aim of this shadowy network would be to attack US and other Western targets including military bases, embassies and officials.

In the following years after his first meetings in the Gulf,  Djidah — believed to be around 50 years old and most likely from Chad — claimed to have recruited between 30 and 40 militants from CAR rebel groups on behalf of Iran’s Revolutionary Guard.

These men travelled to Lebanon, Iraq and Syria in 2017 and 2018 for rigorous training and firearms instruction at Iranian-run camps. While unable to verify the full amount, UN investigators gathered evidence that confirmed their travels to Lebanon  — the base of the Iran-backed militant group, Hezbollah — and Iraq of 12 members of the Saraya Zahraa group. 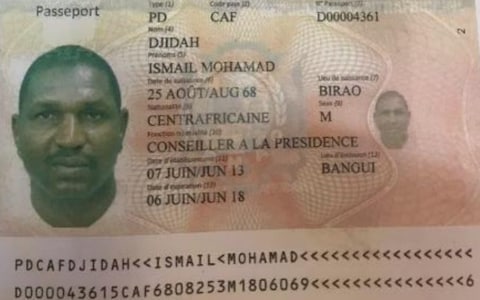 Besides his Central African Republic diplomatic passport, Djidah is believed to have used a fake Nigerian one. (Supplied)

The objective was to establish a group comprising between 200 and 300 militants who would coordinate their activities with other Chadian and Sudanese cells.

Corroborated by the UN’s diplomatic sources, Djidah confessed to receiving between $12,000 and $20,000 from Quds Force personnel during each trip to Iran, Lebanon and Iraq.

The strategy is now coming under major scrutiny inside Iran after a humbling week in which they have lost key commanders to US airstrikes, and then shot down a civilian airliner in a disastrous, panicked reaction.

Reports of Iran’s new African proxies began to emerge last year after Djidah was arrested by security forces in Chad and a small excerpt of his interrogation was leaked to the media. “We want to create an army to fight against Westerners in Africa,” he said.

Since then, a UN panel of experts has obtained a transcript and longer video of Djidah’s testimony, drawing on diplomatic sources to corroborate his claims before publishing their findings in a new report.

After Djidah’s initial visit to Kish Island in 2016, more meetings ensued with personnel from the Quds Force which, as part of Iran’s Republican Guard Corps, specialises in military intelligence and secretive overseas operations. Djidah’s trips to Lebanon and Iraq are revealed in visas and airline documents which confirmed his movements.

For any Iranian commander wishing to recruit a new asset and extend Tehran’s reach into Africa, Djidah appeared a strong candidate. In the rebel-riven badlands of the Sahel, he had made a name for himself as a shrewd operator who could fix meetings with feared warlords. 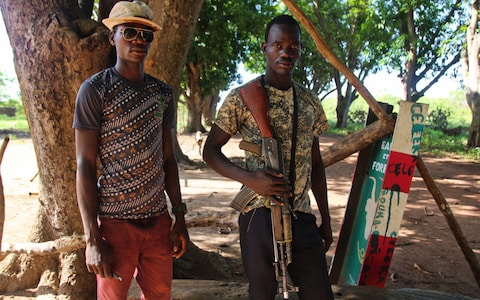 A rebel soldier with the FPRC armed group, stands at a checkpoint on the main road from N’Dele, the same region where Djidah recruited his militants. (THE TELEGRAPH)

From 2005, Djidah’s star began to ascend. He met a Central African official called Michel Djotodia who, following a stint studying in the Soviet Union, was serving as CAR’s consul in the neighbouring Sudanese region of Darfur, then stricken by a catastrophic genocide.

After rebelling against CAR’s authoritarian president, Djotodia was expelled from Sudan and later arrested in Benin in 2006. During almost two years in detention without trial, Djidah sealed their friendship by continuing to help the imprisoned Djotodia, reportedly offering regular financial support.

Following his release in 2008, Djotodia would return to Christian-majority CAR, eventually drawing on his network of militants to create a mainly Muslim coalition of rebels known as the “Seleka”. In 2013, he and his forces seized power in a bloody coup, fulfilling his long-held ambition of becoming CAR’s first Muslim ruler.

He appointed Djidah — now a sworn ally and confidante — to the position of presidential adviser, according to former cabinet ministers and other sources. But after a ten-month rule marred by escalating sectarian violence across CAR, Djotodia was forced to resign in January 2014 and returned to Benin, accompanied by Djidah who continued to work for him there until his arrest in Chad last year.

In his testimony, Djidah claimed that Djotodia had instructed him to collaborate with Iran and says Djotodia had first met with Quds Force officials on Kish Island in April 2016 — allegations backed by the UN’s diplomatic sources. Djotodia’s trip there, via Dubai, was confirmed by the United Arab Emirates, which said he had travelled to Kish in late April 2016 and returned more than a month later. Djotodia told UN investigators that he spent only two days on the island.

“While the Panel evidenced the close connection between Michel Djotodia and Ismael Djidah, it is unable at the present stage to confirm Michel Djotodia’s involvement in the plan as detailed by Djidah.”

The allegations against Djotodia come as this former rebel leader returned to CAR’s capital on Friday after six years in exile — and just weeks after the return of the president he overthrew, Francois Bozizé.

Following a war that has killed thousands and displaced more than a million, the divisive strongmen are widely thought to harbour ambitions to run in this fragile country’s presidential elections later this year.

“I am no longer a former president or a man of war, I am one of the permanent ambassadors for the promotion of universal peace,” said Djotodia after touching down in the capital, Bangui. “I am and will be the last rebel.”

Djotodia denies meeting with Quds Force members and participating in Tehran’s plot. He says the trip to Kish Island was organised by Iranian business partners whom he had met in Dubai.

Iran refutes the allegations and “underlined that it neither interfered in the internal affairs of any country nor supported any violent act,” the UN report adds.

Djotodia’s lawyer told the Sunday Telegraph that the UN had found no corroboration that Djotodia accepted financial support from the Quds force.

Nick Kaufman added: “Nor will it ever find such corroboration given that the only source for these lies is the self-incriminating confession of a totally unreliable witness who was trying to extort money from the Iranian regime.”