Home/Israel, North America, USA/Israel keeping US out of loop on alleged covert attacks in Iran — report
Previous Next

People walk past a banner showing Iran’s Revolutionary Guard Col. Hassan Sayyad Khodaei prior to his funeral ceremony, in Tehran, Iran, May 24, 2022. (AP)

Israel is keeping the US in the dark as it steps up alleged covert operations against Iran’s nuclear program, according to a report Tuesday.

The report from CNN, citing multiple sources, would appear to crack the veneer of close communication and cooperation between Israel and the US regarding efforts against Iran’s nuclear program, and may underline US concerns surrounding Israel’s more aggressive campaign, which has been blamed for a number of high profile killings recently.

According to the sources, the Biden administration has generally refrained from interfering in the alleged targeted assassinations and sabotage activities. Israel does not let the US know about actions ahead of time, and rarely acknowledges them afterward in closed-door conversations.

The network cited a US official who said that Israel was behind the assassination of Iranian Revolutionary Guards Corps Colonel Hassan Sayyad Khodaei last month.

CNN said it spoke to a US official and other sources privy to US intelligence, but did not specify whether they were American, Israeli, or from another country.

Tensions between Israel and Iran have intensified in recent weeks, after the assassination of a top Iranian officer in Tehran last month that it blames on Israel and a number of other deaths of security and scientific personnel in Iran.

It’s unclear why the three would have been in Sistan and Baluchistan, which has no nuclear sites. The restive province that borders Afghanistan and Pakistan faces sporadic attacks from armed insurgent groups.

A day earlier, an IRGC brigadier general acknowledged that a May explosion at a weapons development facility in Parchin which killed an engineer came from “industrial sabotage.” 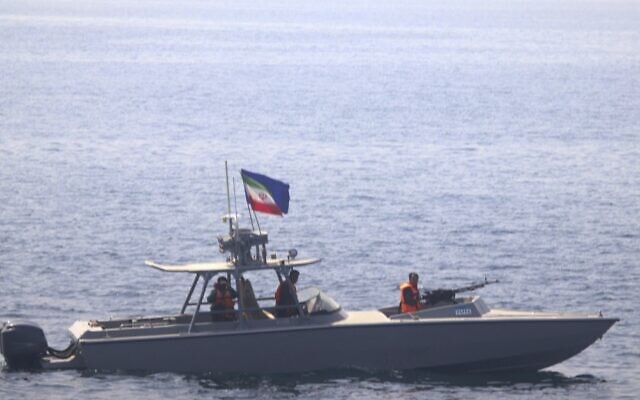 In this photo made available by the US Navy, a boat of Iran’s Islamic Revolutionary Guard Corps Navy (IRGCN) operates in close proximity to the patrol coastal ship USS Sirocco (PC 6) and expeditionary fast transport USNS Choctaw County (T-EPF 2) in the Strait of Hormuz, Monday, June 20, 2022. (US Navy via AP)

“The situation with Iran is getting very hot,” an official told CNN, referencing Iran’s recent decision to dismantle several monitoring cameras at one of its nuclear sites in addition to the spate of attacks carried out by Israel.

On Monday, Iranian ships came within 50 years of a pair of US Navy vessels in the Strait of Hormuz. The Navy told The Associated Press that this marked the second so-called “unsafe and unprofessional” incident it had with Iran in recent months.

A US official told CNN that US President Joe Biden’s July trip to the Mideast will focus on assuring allies that the administration is taking the Iranian threat seriously.

“We are committed to consulting closely with our regional partners regarding US policy on Iran, and in broad terms, we support dialogue among the countries in the region on issues of regional security and stability,” said a spokesperson for the White House National Security Council. 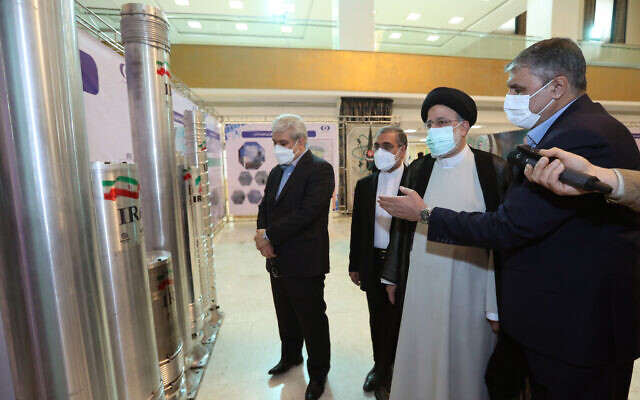 Iran’s President Ebrahim Raisi, second right, listens to an explanation while viewing an advanced centrifuge at an exhibition of Iran’s nuclear achievements in Tehran, Iran on April 9, 2022. (Iran President’s Office)

The US plans to expand economic sanctions and enforcement measures against Iran if talks to revive the nuclear deal known as the Joint Comprehensive Plan of Action fall through, sources familiar with the matter told CNN, adding that the administration has been seeking to build a coalition of countries in the Mideast — including Israel and the Gulf states — that will work together to combat Iran.

The hope in Washington is that this coalition will take some of the pressure off the US to act against Iran, CNN said.