A Hezbollah fighter is seen standing at attention in an orange field near the town of Naqura on the Lebanese-Israeli border on 20 April 2017. (AFP)

Israel has reportedly sent a message to the Lebanese government via Paris demanding that it act against the Hezbollah terror group’s rocket factories in the country, saying if Lebanon refused to do so, Israel could take military action.

The message was delivered by Israel’s deputy national security adviser Eitan Ben-David to Orléan la-Chevalier, a top adviser to French President Emmanuel Macron, during the latter’s visit in Jerusalem on Monday, according to Israel’s Channel 10 news.

France has close longstanding ties with Lebanon, and is considered close to Hariri.

The Prime Minister’s Office declined to comment Thursday on the report.

Ben-David said Israel would be patient, and was willing to wait to see if Lebanon took steps against the factories, but said it would not allow their construction to continue undisturbed.

Largely funded by Iran, Hezbollah remains popular in Lebanon, where it has transformed into a potent political force allied with President Michel Aoun. Many politicians have balked at calls to force Hezbollah to disarm.

Aoun recently denied a claim by Prime Minister Benjamin Netanyahu that Iran was upgrading Hezbollah missiles at secret facilities inside Beirut, taking journalists and diplomats on tours of some of the alleged sites several days later.

Netanyahu had revealed the sites during a speech at the United Nations General Assembly in a bid to spur international action.  He claimed the technology would allow the missiles to hit within 10 meters (32 feet) of its target. 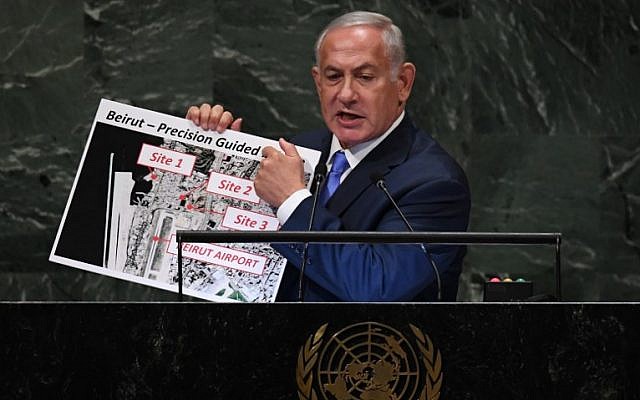 Israel has warned repeatedly about the threat of Hezbollah precision-guided missiles, and has carried out numerous airstrikes inside Syria to keep advanced weapons from being transferred to the terror group.

Lebanon “is becoming a factory for precision-guided missiles that threaten Israel. These missiles pose a grave threat to Israel, and we will cannot accept this threat,” Netanyahu said in January.

Israel and Hezbollah fought a war in July 2006 that saw thousands of missiles rain on northern Israel.

Since then, the terror group is thought to have expanded its arsenal to over 100,000 rockets, with the ability to strike almost anywhere in the country, though only a small number are thought to have precision guided capabilities.

The Israeli Air Force has largely abstained from conducting raids inside Lebanon itself, though it has indicated that it was prepared to do so.

Earlier this year, air force chief Amiram Norkin showed visiting generals a picture of an Israeli F-35 stealth fighter flying near Beirut, in what was seen as a direct message to Hezbollah.

In May, Netanyahu said Israel was “operating against the transfer of deadly weapons from Syria to Lebanon or their manufacture in Lebanon.”