Home/North America, USA/Mike Pompeo goes to war with Iran’s Supreme Leader on Twitter as he accuses him of ‘personally stealing hundreds of millions of dollars’ after the cleric said the US election showed the ‘ugly face of liberal democracy’
Previous Next

Secretary of State Mike Pompeo has lashed out at Ali Khamenei calling Iran‘s elections a ‘joke’ after the nation’s Supreme Leader mocked the US election calling it the ‘ugly face of liberal democracy’.

The two went to war on social media Saturday hours after US TV networks called the election for Joe Biden as votes in Philadelphia pushed his margin in the crucial swing state of Pennsylvania over the edge.

Biden vowed in his election campaign to re-enter the Iran nuclear deal if Iran ‘returns to strict compliance with the deal’ after Donald Trump withdrew from the agreement and imposed harsh sanctions on the nation in 2018.

However, Trump has refused to concede to Biden, has made numerous unsubstantiated claims of voter fraud – while presenting no evidence to back up the claims – and has vowed to fight the election outcome with legal action.

Sources have also said the Trump administration is now planning to slap a list of new sanctions on Iran between now and Biden taking the White House in January.

Pompeo, a strong Trump ally who broke with nonpartisan tradition and spoke at the Republican National Convention in August, hit out at Khamenei Saturday accusing the Iranian Supreme Leader of stealing ‘hundreds of millions of dollars from your people’ and branding the nation’s elections ‘a joke’.

‘Your elections are a joke, with hundreds of candidates disqualified from even running.

‘Today, your people starve because you spend billions on proxy wars to protect your kleptocracy.’

He added in a follow-up tweet that America is ‘the greatest nation’ as he made a thinly-veiled attack on Iran’s human rights record.

‘America is and shall remain the greatest nation in all of human history,’ he continued.

‘We welcome the day when the Iranian people get their wish – and you know what that is. That is all.’

Pompeo’s comments came in response to Khamenei blasting the US election a ‘spectacle’ and saying there is a ‘definite political, civil, & moral decline of the US regime’, as Trump made a series of unsubstantiated claims of voter fraud. 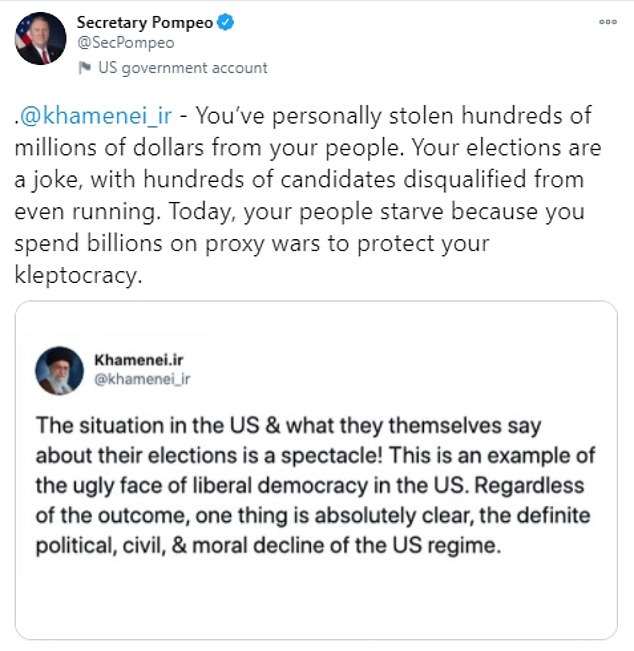 ‘The situation in the US & what they themselves say about their elections is a spectacle!’ Khamenei tweeted on Saturday, not long after the election was called for Biden.

‘This is an example of the ugly face of liberal democracy in the US. Regardless of the outcome, one thing is absolutely clear, the definite political, civil, & moral decline of the US regime.’

This isn’t the first time the two have exchanged blows on Twitter over the US election.

On election day, Pompeo slammed Iran in a social media post where he brought up the Iran hostage crisis between 1979 and 1981 where 52 American diplomats and citizens were held hostage by Iran and said the ‘regime still holds innocent U.S. citizens today’.

’41 years ago, the Iranian regime took 52 U.S. diplomats hostage for 444 days. We remember their sacrifice,’ he tweeted.

Khamenei didn’t respond directly to the post but just hours later hit out at the US election process. 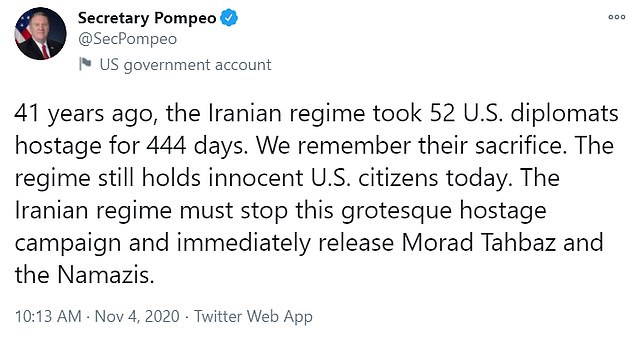 The two also came to blows on election day (above). Tensions have escalated between Iran and the US under Trump with the president withdrawing the US from Tehran’s 2015 nuclear deal

‘What a spectacle! One says this is the most fraudulent election in US history. Who says that?’ he tweeted.

‘The president who is currently in office. His rival says Trump intends to rig the election! This is how #USElections & US democracy are.’

The Twitter spat comes as a new report claims the Trump administration is planning to ‘flood’ Iran with a stream of new sanctions in the 10 week run-up to the presidential inauguration on January 20.

Two Israeli sources told Axios Trump is planning the last-ditch clampdown on the nation in cahoots with Israel, with the possibility of rolling out a new set of sanctions on Iran every week between now and then.

‘The goal is to slap as many sanctions as possible on Iran until January 20,’ one of the sources said.

Pompeo is expected to travel to Israel on November 18 to plan the sanctions, the outlet reported.

Such a move appears to be a last-ditch attempt to derail Biden’s plans to re-enter the Iran nuclear deal.

However it also suggests that Trump has behind the scenes at least partially accepted that his re-election chances have disappeared, despite his ongoing claims to fight the election result.

Tensions have escalated between the US and Iran under Trump with the president withdrawing the US from the 2015 nuclear deal in 2018, which had seen Tehran limit its enrichment of uranium in exchange for the lifting of economic sanctions.

The US has also imposed punishing sanctions on Iran that have crippled its economy.

Iran President Hassan Rouhani called on Biden to ‘compensate for past mistakes’ and return America to the nuclear deal, according to the state-run IRNA news agency news on Sunday.

‘Now, an opportunity has come up for the next U.S. administration to compensate for past mistakes and return to the path of complying with international agreements through respect of international norms,’ he said.

Biden has vowed to rejoin the deal, which was agreed by the Obama administration when he was vice president, as long as Iran also returns to compliance.