Women walk past electoral posters for the elections in central Tehran, February 24, 2016. (REUTERS)

A poll conducted on Wednesday by a state-run Iranian news network found that over 80 percent of Iranian participants said they will not vote in the upcoming parliamentary elections.

Conducted by the state-run Iran News Network channel (IRINN) through the popular messaging app Telegram, the poll was deleted by IRINN after the results came in.

The last option was selected by 82 percent of the participants. 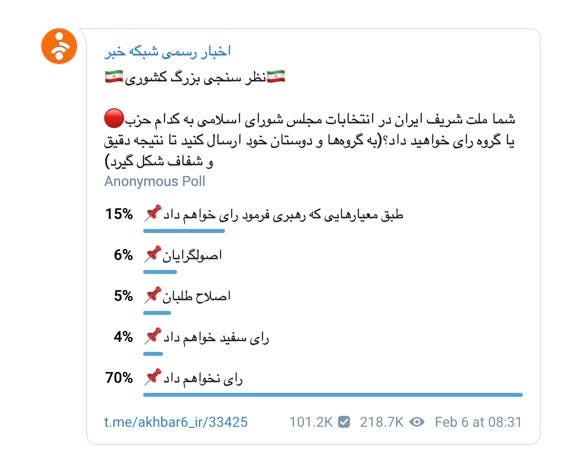 Screenshot of the IRINN poll with over 100k participants so far, showing the last option of “I will not vote” in the lead. (Screenshot)

IRINN reuploaded a new poll on Thursday, replacing the “[I will vote for] independent candidates” option with “I will cast a blank ballot” and adding a new option that read “I will vote based on the criteria set by the Supreme Leader (Khamenei).”

In the new poll, with over 100,000 votes so far, 70 percent of participants have said that they will not vote in the elections.

“Any person who has an affinity for Iran and its security must take part in the election,” Khamenei said in a speech.

“One may not like me personally, but if they love Iran, they must go to the ballot box,” he added.

The Islamic Republic fears a low turnout in the upcoming elections given the widespread November protests as well as the protests that broke out following Iran’s admission to downing the Ukrainian airliner last month.

Imprisoned Iranian human rights activist Narges Mohammadi called on her compatriots to boycott the upcoming elections to honor those killed in the anti-government protests last November, and not give the regime legitimacy.