Iran’s President Ebrahim Raisi speaks before parliament to defend his cabinet selection in the capital Tehran on August 21, 2021. (AFP)

Conservative cleric Ebrahim Raisi was inaugurated as Iran’s sixth president in August, coming into office as an uncompromising hard-liner, in contrast to his predecessor, Hassan Rouhani.

As a supporter and close confidant to Ayatollah Ali Khamenei, Raisi can count on the backing of Iran’s parliament, where hardliners have held a majority since early 2020.

Raisi began his term by pledging a “revolutionary” emergency recovery program to repair Iran’s economy, which has been battered by international sanctions, the coronavirus pandemic and structural problems, while promising “peace and prosperity” to all Iranians.

“Peace for the country and prosperity through economic growth are not part of the fundamental policy of the Islamic Republic,” said Fatemeh Haghighatjoo, head of the US-based NGO Nonviolent Initiative for Democracy Inc.

“Those in power, especially the hard-liners, dream of exporting their ideology and greater influence in the region through military strength,” Haghighatjoo said.

From 2000 to 2004, Haghightjoo was a member of the Iranian parliament as a reform-oriented politician. She has lived in the US since 2005.

“In Iran, we have an autocratic system, with the supreme religious leader at the top who wants to decide everything,” Haghightjoo said. For Khamenei, Raisi is merely an “instrument” used for pushing through the supreme leader’s agenda, she added.

After 100 days in office, Raisi is facing economic challenges on several fronts.

Iran is currently dealing with rising COVID-19 infections. The rial is tanking in value, and the country’s largest banks are racking up huge losses.

Relief from US sanctions, and a positive outcome in negotiations on reviving the nuclear deal are considered vital if the Iranian economy is to recover.

Nuclear talks with the UK, France, Germany, Russia and China are planned in Vienna on November 29.

The US has said it will pull back sanctions and return to the deal only if Iran agrees to stop enriching uranium, which Tehran expanded after US President Donald Trump dumped the agreement in 2018.

On behalf of Khamenei, they are now considering ways to revive Iran’s economy under the continued weight of US sanctions.

In several recent interviews, Foreign Minister Hossein Amirabdollahian has alluded to Iran’s “decoupling” of its economy from the outcome of nuclear negotiations.

Are Iranian hard-liners looking to Russia?

One option for Iran to pull this off would be to increase cooperation with Russia.

Moscow maintains close ties with Iranian hard-liners, who in 2015 are said to have worked with Russia on trying to derail the nuclear agreement to prevent Iran from moving closer to the West.

And Russian President Vladimir Putin was the first head of state to congratulate Raisi on his election victory.

Putin also maintains a friendship with Khamenei, who gave him an old manuscript of the Quran in 2015. 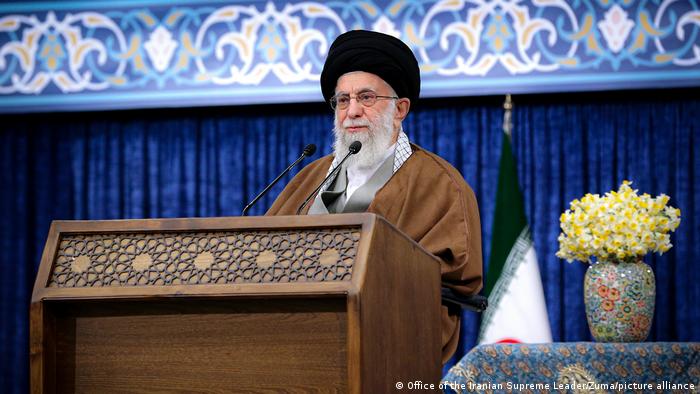 Russia’s government recently expressed support for Iran to return to nuclear negotiations with the West.

In a phone call on November 6, Russian Foreign Minister Sergey Lavrov and Amirabdollahian spoke about “restoring the nuclear deal in its original balanced form, approved by the United Nations Security Council.”

And bilateral ties between Russia and Iran could also be snagged on the geopolitical implications of gas reserves, Iranian business expert Alireza Salavati told DW.

“Raisi’s government wants to turn focus eastward, even if this is not in Iran’s national interest,” Salavati said. “Iran has the second-largest gas reserves in the world,” he added. “This could make it a serious competitor to Russia.”

Nevertheless, Khamenei has reached out personally to Putin about strengthening Russia-Iran ties.

In February, Iranian media reported that the supreme leader had sent a letter to Putin, emphasizing the “strong and strategic nature of relations between Iran and Russia,”  parliamentary speaker Mohammad Bagher Ghalibaf told the ParsToday news website.

The extent to which Khamenei has a direct influence on Iranian domestic politics is shown by the wrangling over importing COVID vaccines.

Ahead of the election, hard-liners vying for Khamenei’s attention seized the opportunity to demand that the Rouhani’s government abandon imports of COVID vaccines altogether and instead push for the development of a domestic vaccines.

After Raisi’s election victory, the hard-liners changed their position, blaming the moderate Rouhani for not securing available vaccines from abroad and denying that Khamenei had banned imports.

The parliamentary health commission now wants to take Rouhani to court personally for “mismanagement of the pandemic.”

This comes as no questions are asked about $1 billion (€870 million) in government funding sent to the Iranian Barakat Foundation to develop a vaccine.The institute’s head, Mohammad Mokhber, who is now Iran’s vice president, promised to deliver 120 million doses of the COVIran vaccine.

According to an investigation by the Jahane Sanaatnewspaper, Mokhber received permission from the government to import the Sinopharm vaccine from China. Now many Iranians are wondering under what label vaccines will be distributed in the country.

“Negative reporting about the alleged deadly side effects of foreign vaccines have made many reluctant to get vaccinated,” epidemiologist Ahmad Babak Mehri told the state news agency IRNA earlier this week.