Israel has informed the United States that Lebanese Hezbollah fighters in Syria are using US armored personnel carriers originally supplied to the Lebanese Army, a senior Israeli military officer said on Wednesday.

The US State Department said last month that the American embassy in Beirut was working to investigate images on social media purporting to show Hezbollah, which supports President

Those images were widely reported to have been of US-made M113 armored personnel carriers, which the State Department said were extremely common in the region.

In an intelligence briefing to foreign reporters in Tel Aviv, the senior officer showed a photograph of military vehicles, which he said included US-made armored personnel carriers (APCs), along a road.

“These APCs are of the Hezbollah, while fighting in Syria, that they took from the Lebanese armed forces,” he said in English, describing the guerrilla group as dominant in Lebanon.

“We shared this information with other countries, including the US of course, and I can even say that we recognized these specific APCs with some specific parameters that we know … these

were given to the Lebanese armed forces. It’s not an assumption,” said the officer, who under the rules of the briefing could not be identified by name, rank or position.

Western diplomatic sources have said the APCs were delivered to the Lebanese Army by the United States as part of a program to equip that force. 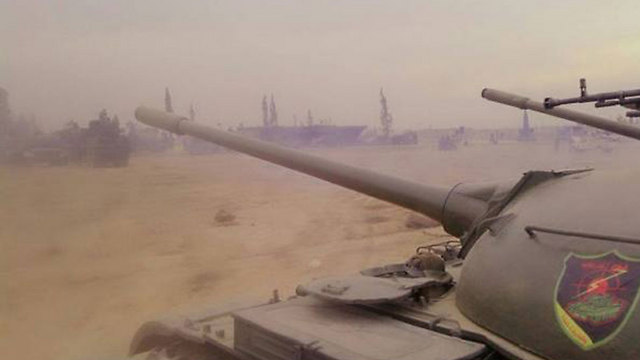 Hezbollah shows off its tank division

The officer made no comment about when the APCs would have been supplied to the Lebanese Army.

The officer said Hezbollah has 8,000 fighters in Syria where more than 1,700 of the group’s combatants have been killed since 2011.

Israel and Hezbollah, which the officer said has 30,000 members, half of them combatants, last fought a war in 2006.