‘Suicide drones’ linked to Iran have made their way to Yemen rebels, photos suggest

Home/Yemen/‘Suicide drones’ linked to Iran have made their way to Yemen rebels, photos suggest
Previous Next

‘Suicide drones’ linked to Iran have made their way to Yemen rebels, photos suggest

Iranian drones are seen during a large-scale drone combat exercise in Semnan in January, 2021. (AFP)

By Tom O’Connor and Naveed Jamali

An unmanned aerial vehicle that appeared at a weapons exhibition held earlier this year by the rebels ruling much of Yemen bears a striking resemblance to the kamikaze drone believed to have been used later in a deadly attack against an oil tanker off the coast of Oman, experts told Newsweek.

The system used in that operation and others like it have been linked by U.S. officials and other analysts to Iran, but experts also noted the near impossibility of drawing a direct link to any single source.

Mercer Street, a Liberia-flagged vessel operating on behalf of a company owned by an Israeli businessman, was hit by two back-to-back explosions in July while sailing through the Gulf of Oman. The latter blast killed the ship’s captain, a Romanian national, along with its security officer, a citizen of the United Kingdom.

The incident sparked international outrage as the United States and Israel attributed the event to one-way drones built by Iran, which denied any involvement in the attacks. The top suspect is a model referred to by experts and foreign officials as “Shahed-136,” a so-called “suicide drone” with an estimated range of 2,000 to 2,200 kilometers, or roughly 1,240 to 1,370 miles.

“We are confident, based on our assessment of the debris that was recovered from the M/T Mercer Street, that the system used in the attack was an Iranian Shahed-136 UAV and these are manufactured only in Iran,” U.K. Permanent Representative to the United Nations Barbara Woodward told the U.N. Security Council last month.

But the unique “delta-wing”-style drone has also been identified elsewhere, notably in Yemen, where the Ansar Allah, or Houthi movement, possesses a very similar platform referred to as Waeed. Allegations that Iran supplies such weapons to Ansar Allah have been rejected by both parties.

For some time, however, the best publicly available images of the drone known as Shahed-136 emerged after an attempted Ansar Allah attack on Saudi-backed forces near Al-Alam in Yemen’s Marab province last September. A photo from this incident was used by U.S. Central Command in its own assessment tying Iran to the Mercer Street attack.

The image also appeared in Newsweek‘s report in January that appeared to show such weapons deployed to Yemen’s Al-Jawf province. The same day this report was published, Iran’s Revolutionary Guard released video of a similar but unnamed drone being used to strike a tank during a training exercise. Further delta-wing drone training footage was aired in May.

Now a new photo analysis shared with Newsweek by an expert who follows Iranian activities in the region and wished to remain anonymous outlines similarities between the drone downed in Marib and the Waeed on display at the Martyr Leader Exhibition held by Ansar Allah on March 11.

Neither Iran’s permanent mission to the U.N. nor a spokesperson for Ansar Allah immediately responded to Newsweek‘s request for comment.

However, as accusations against Tehran mounted in the wake of the Mercer Street incident, Iran’s permanent mission to the U.N. last month shared with Newsweek a letter delivered to the U.N. Security Council by Zahra Ershadi, Iranian ambassador and deputy permanent representative to the international body.

She criticized the U.K.’s use of “uncertain terms as ‘highly likely,’ ‘initial assessments’ and ‘one or more Unmanned Aerial Vehicles,’ as well as vague terminologies like ‘international partners,’ to arbitrarily accuse the Islamic Republic of Iran of attacking the Mercer Street vessel” in London’s own letter to the U.N. Security Council.

“This unfounded claim — which was first raised, for obvious political purposes, by the Israeli regime immediately after the attack — is factually wrong and politically and ethically irresponsible, and accordingly is categorically rejected,” Ershadi said.

“Immediately following this event, Israeli officials accused Iran of the incident. This is what they usually do,” Ershadi said. “It is a standard practice of the Israeli regime. Its aim is to divert attention of the world public opinion from the regime’s crimes and inhumane practices in the region. To that end, they accuse others of wrongdoing. In almost all incidents in the Middle East, Israel accuses Iran. They do it immediately and provide no evidence.”

The Mercer Street attack was the latest act in an ongoing shadowy campaign at sea, where multiple attacks targeting oil tankers have threatened to ignite tensions in the region’s strategic waters and disrupt international commerce.

In parallel to the two-year string of attacks off the Arabian Peninsula that the U.S. and Israel have blamed on Iran, there have been multiple strikes against Iranian vessels carrying fuel to Syria. Officials in Tehran believe Israel to be behind these actions, and Ershadi referenced specific incidents in January, March and April, the most recent of which was reported to have killed three Syrians.

It remains difficult to assign blame for attacks like that which struck Mercer Street, even when debris is recovered. Nations and other possible entities are unwilling to own up to their involvement in such operations, and most can actively obscure their fingerprints at sea and on land, where unclaimed drone attacks have emerged in places such as Iraq.

“I’d think of it as art, honestly,” a former U.S. military official and drone expert told Newsweek. “The first time a painter paints, no one knows who painted it.”

Like art, drone attacks have a style and signature that can be duplicated.

“Then they become more well known and maybe it becomes more obvious what their style is,” the former official said. “Then they get copied, which makes it harder to know if it’s a true original. Which then makes it into something that takes refined skill to know the subtle differences.”

In the case of the attacks attributed to Iran in the Gulf of Oman, the former official continued the art analogy to argue that the true value is not necessarily in the work itself, but the identity of those who executed it.

“Then compound the analogy by the fact really what you are after is who used the drone and less who made it,” the former official said. “So even if you know there’s a high probability that Iran made it, it’s in their interest to sell it to as many folks as possible so they can use it more indiscriminately.”

Analyzing the comparison of the drones used in the Mercer Street attack in July and displayed by Ansar Allah months earlier in March, the former official said that “80 percent, those are the same aircraft.”

Others also identified a link, albeit with key differences.

“Iran uses cheaper and easier-to-use technologies for her proxies that both make it easier for them to use and also provide deniability,” an open-source intelligence and Iranian weapons expert who goes by the name Mehdi told Newsweek. 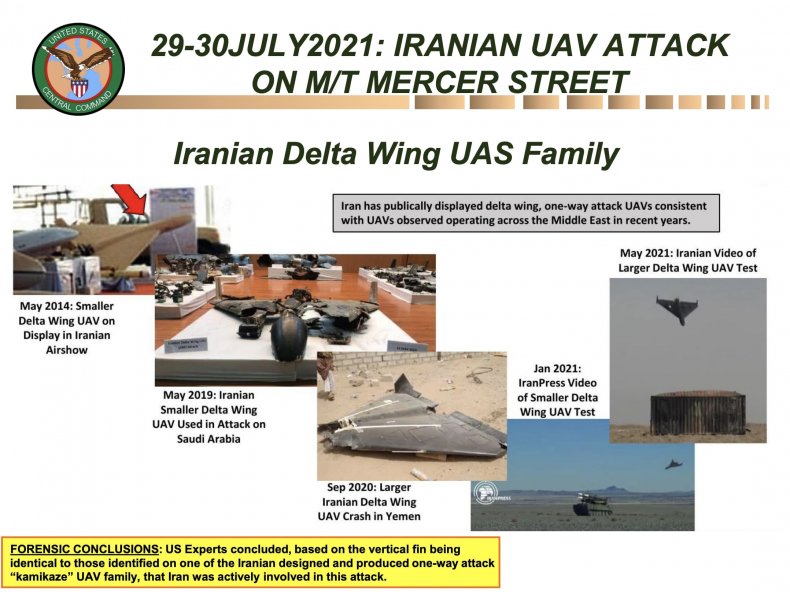 He said the two drones seen in the photos “obviously have a similar design but are not the same.”

The expert who originally shared the analysis with Newsweek concurred with Mehdi’s opinion.

“I believe that the Waeed and Shahed-136 are basically the same drone,” that expert said. “They might have a different engine but they are the same.”