Home/Isreal/‘It’s a trap’: Iran decries IAEA probe into uranium at site flagged by Israel
Previous Next

The flag of the International Atomic Energy Agency (IAEA) flies in front of its headquarters in Vienna, Austria, May 28, 2015. (Reuters)

Iran on Sunday slammed reports that the UN atomic agency had found traces of uranium at a site flagged by Israel last year as a nuclear development warehouse in Turquzabad.

Bloomberg reported Thursday that a senior International Atomic Energy Agency official had told diplomats in a closed-door meeting in Vienna that the Islamic Republic was “evading attempts to discover the source of manmade and natural uranium particles detected at a warehouse in Tehran.”

The extraordinary meeting of the board of governors was convened by Cornel Feruta, the organization’s acting head, to discuss the latest concerns about Iran’s nuclear program, the report said.

In September, the Reuters news agency reported that traces of uranium had been found at the facility on the outskirts of Tehran that was alleged by Prime Minister Benjamin Netanyahu to be a “secret atomic warehouse.” The IAEA reportedly confirmed that detail last week to member states.

“The Zionist regime and Israel are attempting to re-open … this file,” Iranian Foreign Ministry spokesman Abbas Mousavi was quoted by Reuters as saying Sunday on state television.

“We have announced that this is a trap,” Mousavi reportedly added. “Hopefully the IAEA will maintain its vigilance.” 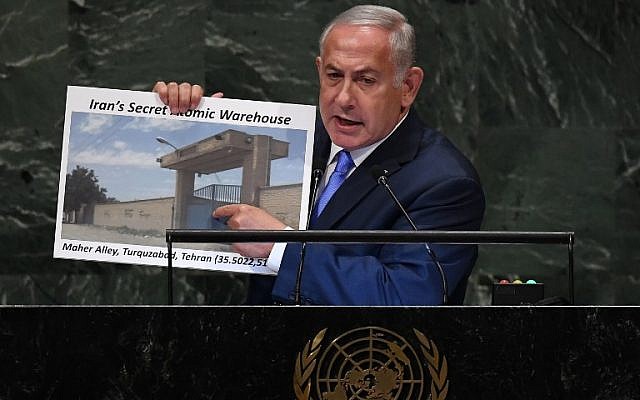 Prime Minister Benjamin Netanyahu addresses the General Assembly at the United Nations in New York on September 27, 2018, holding up a picture of an alleged Iranian “secret atomic warehouse.” (AFP)

In a speech last year at the UN General Assembly, Netanyahu revealed the existence of the warehouse in Turquzabad, which he said held “massive amounts” of equipment and material that were part of a secret Iranian nuclear program.

Netanyahu called for the IAEA to inspect the facility and, in July, Israeli television reported that soil samples from the warehouse turned up “traces of radioactive material,” without specifying the type.

Citing two unnamed diplomats, Reuters reported that the material found at the site was determined to be uranium. One of the diplomats, however, said the uranium was not enriched enough to be used for a nuclear bomb.

“There are lots of possible explanations” for why uranium traces were found there, the diplomat said.

The report said it was difficult to determine the origin of the uranium since Iran has not provided answers. It noted it was unclear whether the traces came from material at the site before or after the 2015 international deal was signed to limit Tehran’s nuclear program.

Iran’s failure to explain why uranium was found at the warehouse fueled tensions with the United States, according to Reuters. 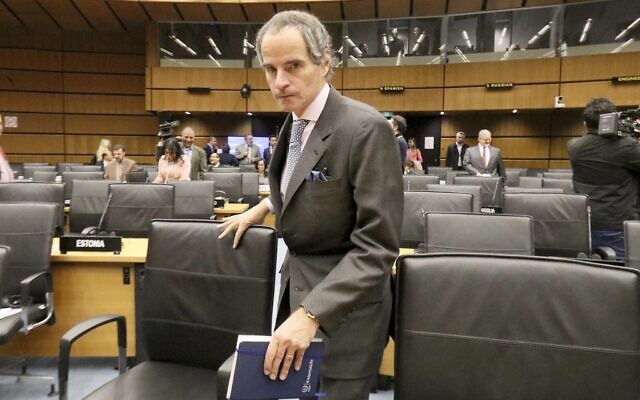 Elected Director General of the International Atomic Energy Agency (IAEA), Rafael Mariano Grossi from Argentina, waits for the start of the IAEA board of governors meeting at the International Center in Vienna, Austria, November 7, 2019. (AP)

In September, the Wall Street Journal reported that Iran was obstructing the investigation into the Tehran site identified by Netanyahu. Unidentified diplomats told the newspaper Iran was refusing to provide answers to questions posed by the IAEA, in what was apparently the first instance of Tehran failing to cooperate with inspectors.

The diplomats told the WSJ that the uranium traces were likely remains from Iran’s past experimentation in nuclear weapons development. Iran has denied ever seeking nuclear weapons, though Israeli and Western intelligence strongly dispute those assertions. The diplomats said the material’s existence at the site was unlikely to indicate new work on weapons development, but would be a breach of Iran’s commitment to non-proliferation.

Iran has denied that the site was a nuclear facility or served any secretive purpose. In an initial response to Netanyahu’s UN speech, Iranian state media claimed the warehouse was actually a recycling facility for scrap metal.

US President Donald Trump pulled out of the nuclear accord last year and reimposed stringent sanctions on Iran. Tehran has subsequently taken a number of steps to roll back its commitment to the accord over what it says is a failure by the deal’s remaining signatories to provide economic relief from the sanctions.

Last week, Iran began injecting centrifuges with uranium at the Fordo facility, where it was barred from conducting such work under the nuclear deal.