“The defense ministry has achieved a major task today in supplying two ships to the Islamic Republic of Iran — the destroyer Dena and a minesweeper,” Iran’s President Hassan Rouhani said in a speech.

The delivery of the two ships came after Iran announced on Thursday that it had “for the first time” sent a small squadron of ships into the Atlantic Ocean, with the goal of “reinforcing its maritime capabilities.”

According to a statement by the army chief of staff, the Dena “is an entirely Iranian destroyer,” equipped with a “helicopter landing zone” and a “range of defense and attack systems.”

It has the capacity to “cover long distances” and is equipped to “destroy all aerial threats,” along with underwater threats.

The minesweeper, named “Shahin,” is over 33 meters in length and is capable of “detecting and neutralizing diverse types of naval mines,” the statement said.

Also minesweeper “Shahin” (M111) joined to Iranian Navy in Bandar Abbas. This is the lead ship from a series of minesweepers of a new project that are now being built in Iran. pic.twitter.com/ZFpTgJZXHo

The Iranian navy on June 2 lost one of its biggest ships, the Kharg, which sank in the Gulf of Oman, after it was struck by a fire that raged for hours.

The crew was evacuated and the cause remains either unknown or unpublicized.

Iranian naval forces described the Kharg as a “support (and) training vessel,” but military specialists GlobalSecurity.org categorized it as a helicopter carrier and fuel replenishment vessel.

The fire aboard the Kharg warship followed a series of mysterious explosions that began in 2019, targeting commercial ships in the Gulf of Oman. The US Navy accused Iran of targeting the ships with limpet mines, timed explosives typically attached by divers to a vessel’s hull. 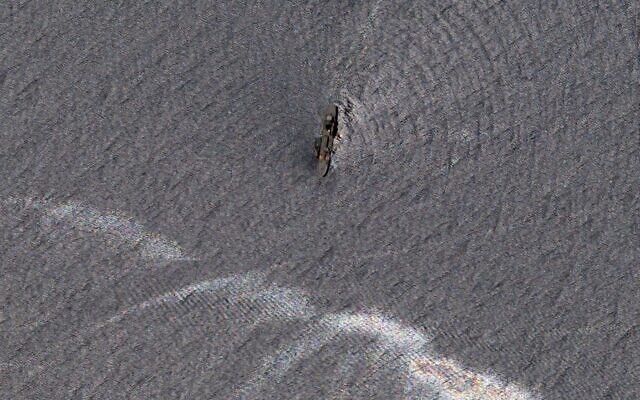 Oil-slicked waters spread out from the partially sunk Iranian navy vessel Kharg in the Gulf of Oman off the coast of Jask, Iran, in this June 3, 2021. (AP)

Iran denied that, though US Navy footage showed Revolutionary Guard members removing one unexploded limpet mine from a ship. The attacks came amid heightened tensions between the US and Iran after then-president Donald Trump unilaterally withdrew America from Tehran’s nuclear deal with world powers. Negotiations on saving the accord continue in Vienna.

In April, an Iranian ship called the MV Saviz believed to be a Guard base and anchored for years in the Red Sea off Yemen, was targeted in an attack suspected to have been carried out by Israel. It escalated a years-long shadow war in the Mideast between the two countries, ranging from strikes in Syria, assaults on ships, and attacks on Iran’s nuclear program.