US presses for Americans’ release in direct talks with Iran

US presses for Americans’ release in direct talks with Iran

Businessman Siamak Namazi, pictured in an undated photo, and his father have been detained in Iran since October 2015 and February 2016, respectively.

U.S. diplomats used a meeting with their Iranian counterparts to press the release of Americans being detained in Iran, the Trump administration said Thursday. It is the first public acknowledgment of direct U.S.-Iranian discussions since President Donald Trump took office.

State Department spokesman Mark Toner said the talks occurred on the sidelines of a meeting in Vienna this week that focused on implementation of the Iran nuclear deal. Trump has railed against the seven-nation accord that President Barack Obama’s administration led to completion in 2015. But Trump’s aides recently certified that Iran was upholding its commitment to not advance its nuclear program toward weapons capability.

Although Trump and his top advisers have publicly criticized Iran for its support of Syrian President Bashar Assad, Yemeni rebels and militant groups throughout the Middle East, American officials haven’t spoken about any continuation of U.S.-Iranian conversations that became routine under the Obama administration. 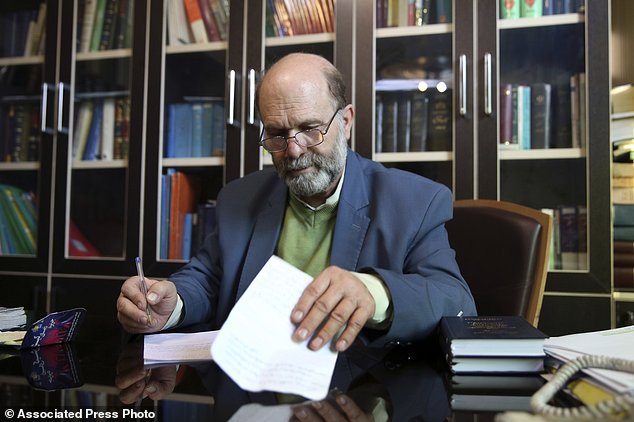 In this Feb. 25, 2016, file photo, Iranian lawyer Mahmoud Alizadeh Tabatabei, who represents dual U.S.-Iranian citizens Siamak Namazi and his father Baquer works at his office in Tehran, Iran. U.S. diplomats used a meeting with their Iranian counterparts to press the release of Americans being detained in Iran, the Trump administration said April 27, 2017. State Department spokesman Mark Toner cited the detentions of Iranian-American businessman Siamak Namazi and his 81-year-old father, Baquer Namazi, who are serving 10-year prison sentences for “cooperating with the hostile American government.” The younger Namazi has been detained since October 2015 and his father was taken into custody in February 2016.(AP Photo/Vahid Salemi)

At Tuesday’s meeting in Austria, Toner said, “the U.S. delegation raised with the Iranian delegation its serious concerns regarding the cases of U.S. citizens detained and missing in Iran, and called on Iran to immediately release these U.S. citizens so they can be reunited with their families.”

Toner cited the detentions of Iranian-American businessman Siamak Namazi and his 81-year-old father, Baquer Namazi, who are serving 10-year prison sentences for “cooperating with the hostile American government.” The younger Namazi has been detained since October 2015 and his father was taken into custody in February 2016.

Their supporters deny the charges and say the two are being held as leverage against the United States. Iran has detained dual nationals to use as bargaining chips in negotiations with the West, most notably in a controversial 2016 prisoner swap with the U.S. that coincided with American sanctions being removed as part of the nuclear deal and a $1.7 billion payment by Washington to settle a decades-old dispute with Tehran over a frozen Iranian account.

Both Namazis appear to be ensnared by hard-liners within Iran’s security services who oppose Iranian President Hassan Rouhani and the nuclear deal he struck with world powers.

Toner also noted it has been more than a decade since the disappearance of former FBI agent Robert Levinson, a CIA contractor in 2007 traveling on an unauthorized mission to collect intelligence. The only photos and video of Levinson emerged in 2010 and 2011. He appeared gaunt and bearded with long hair, and was wearing an orange jumpsuit similar to those worn by detainees at the U.S. prison at Guantanamo Bay.

“Iran committed to cooperating with the United States in bringing Bob home and we call on Iran to fulfill this commitment,” Toner said, though Tehran has been providing such commitments previously. “The United States remains unwavering in its efforts to return Bob to his family.”

Toner made no mention of an Iranian-American who was recently released on bail from his long prison sentence in Iran for “collaboration with a hostile government.” While Robin Shahini of San Diego was let go from prison, it was unclear if he would be permitted to leave Iran. Shahini traveled to Iran to see his mother, who has Alzheimer’s disease, and was detained last July.