Venezuelans rally against Argentina over grounding of Iran-linked plane

Venezuelans rally against Argentina over grounding of Iran-linked plane

Workers of the Venezuelan airline Conviasa protest in front of the Argentine embassy in Caracas demanding the return of an Emtrasur cargo plane and its crew that were held in Argentina on June 8 under investigation, in Caracas, on August 11, 2022. (AFP)

An official Venezuelan delegation, including the country’s transportation minister, protested Thursday outside Argentina’s embassy in Caracas against the grounding of a plane and its crew in Buenos Aires since June.

The Boeing 747 cargo plane, owned by Venezuelan company Emtrasur, has been held in Argentina since it arrived on June 8 from Mexico with a shipment of auto parts, after having tried unsuccessfully to enter Uruguay.

Minister Ramon Velasquez and pro-government lawmakers visited the embassy Thursday to protest, as a few dozen workers of state airline Conviasa gathered outside chanting: “Return the plane and crew!”

Conviasa, which controls Emtrasur, is the target of US sanctions.

“We gave the ambassador some communications so that the authorities, the counterparts in Argentina, can sit down and talk about the situation, find the best alternative and the best solution to this problem,” Velasquez said afterwards. 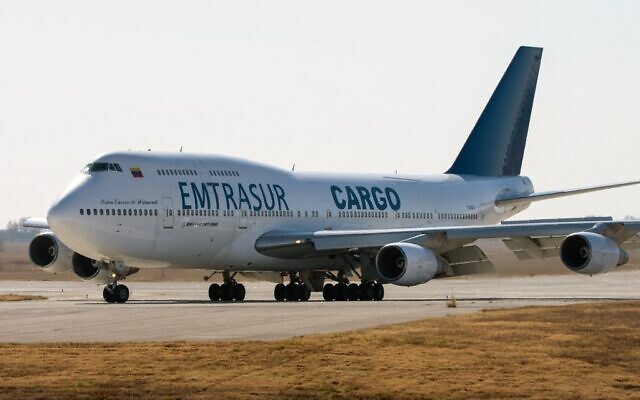 In this photo from June 6, 2022, a Boeing 747-300 registered under number YV3531 of Venezuelan Emtrasur cargo airline is seen at the international airport in Cordoba, Argentina, before taking off for Buenos Aires. (AFP)

“We hope that the truth prevails, that the Argentine justice system reacts, that it does not take this situation plagued by illegality to new levels,” he said.

The Boeing first entered Argentina on June 6 with a load of auto parts from Mexico.

Unable to refuel in Buenos Aires due to the sanctions, the plane left for Montevideo on June 8. But the Uruguayan authorities refused it access, and it flew back to Argentina.

A judge ordered the plane be detained in light of an investigation into the crew of 14 Venezuelans and five Iranians.

Last week, a judge gave the green light for 12 of the crew members to leave Argentina — minus four Iranians and three Venezuelans. That decision is now being appealed.

Velasquez said the crew members were being investigated for “espionage and terrorism.”

“They have not yet been called to testify, their right to a defense is being violated,” he charged.

The Paraguayan intelligence service has linked one of the Iranian crew members to the Quds Force, a group of the Iranian Revolutionary Guards classified as a terrorist organization by the United States.

But Velasquez said the intelligence report was “biased.”

The United States has asked Argentina to seize the plane, claiming laws were broken when it was sold by Iran to Venezuela — both countries under US sanctions.

Last week, Venezuelan President Nicolas Maduro protested the US request, which he said amounted to an attempt to “steal” the plane, and asked Argentina for backing.

The United States’ entry into the fray has also given rise to street demonstrations in Venezuela.

Argentine presidency spokeswoman Gabriela Cerruti said at her weekly briefing Thursday that the outburst “does not imply a diplomatic incident.”