With Iran in mind, Israel signs deal with US for heavy choppers, refueling planes

With Iran in mind, Israel signs deal with US for heavy choppers, refueling planes

A Sikorsky CH-53K King Stallion heavy transport helicopter, which Israel signed an agreement to purchase from the US on Dec 30, 2021. (Lockheed Martin)

Israel on Thursday signed a long-awaited agreement to purchase a dozen heavy transport helicopters and two additional refueling planes from the United States, in a weapons deal worth over $3 billion, the Defense Ministry said.

These aircraft, along with a number of additional F-35 fighter jets that Israel plans to purchase from the US, are specifically meant to counter threats posed by Iran, including its nuclear program.

According to the ministry, in addition to the fighter jets, transport helicopters and refueling planes, this includes “advanced aerial munitions, air defense systems, new naval and land-based platforms, and cyber and digital systems.”

The 12 CH-53K Sikorsky CH-53K King Stallion heavy transport helicopters will replace Israel’s aging fleet of CH-53 Sea Stallion helicopters, which have been in use for over half a century and have seen a number of maintenance issues in recent years. The first CH-53K helicopters are scheduled to arrive in Israel in 2026, according to the ministry.

Under the agreement, Israel has the option to purchase six more CH-53K helicopters in the future as well.

In addition, the delegation of the ministry’s purchasing department signed a deal to buy two more Boeing KC-46 refueling planes, which would be needed in order to conduct strikes against targets in Iran, some 2,000 kilometers (1,200 miles) from Israel and far outside the regular flight range of Israeli jets. 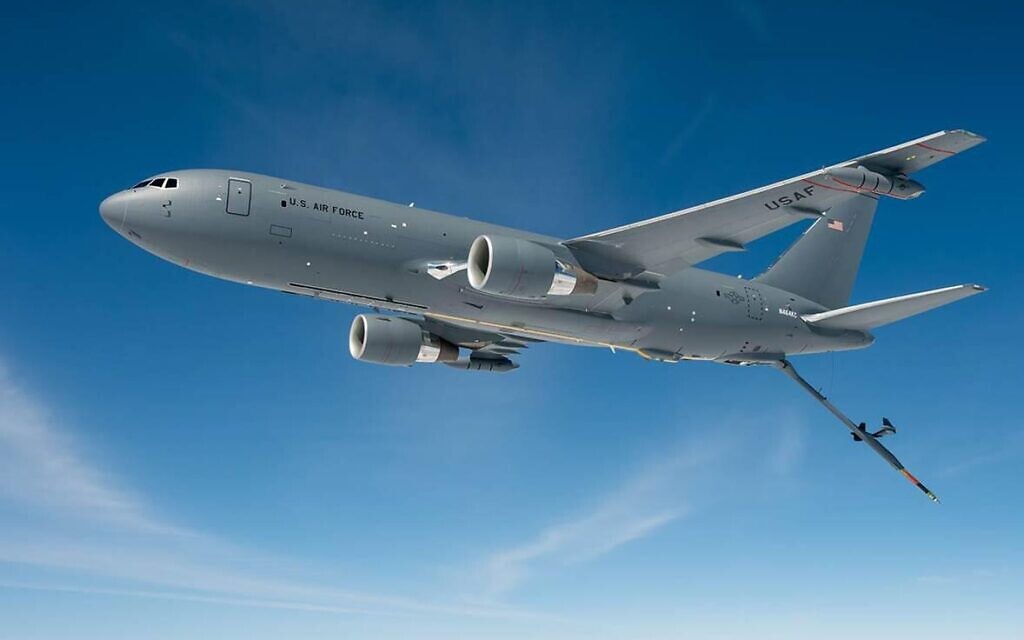 An undated photograph of a Boeing KC-46 refueling plane, which Israel signed an agreement to purchase from the United States on December 30, 2021. (Boeing)

Israel has already agreed to purchase two of these refueling planes, which are scheduled to arrive in 2025. Israel has asked that this date be moved up by a year — a move that would require the US to give up its spot in line to receive the planes from Boeing — but Washington has thus far rejected the request.

The helicopter deal will cost Israel roughly $2 billion and the refuelers will cost another $1.1 billion, with the money coming from the $3.8 billion that Israel receives from Washington as part of the 10-year memorandum of understanding between the two countries, the ministry said.

“The purchase of these platforms is part of a wider effort, which is being led by the Defense Ministry with the IDF over the past year and a half to strengthen the capabilities and force build-up of the IDF against current and future threats, mostly those posed by the ‘third-ring,’” the Defense Ministry said.

In Israeli military parlance, the first ring refers to threats directly on the country’s borders, the second ring refers to slightly farther-flung enemies, like those in Iraq or Yemen, and the third ring refers to those yet further away — in practice, it is almost exclusively used in connection with Iran.

Defense Ministry Benny Gantz negotiated the initial approvals for the sales with US officials. The budget was then approved by the ministerial committee for military acquisitions and the Knesset’s joint defense budget committee, Gantz’s office said. This summer, the US State Department also signed off on the sale of the helicopters saying it was “vital to US national interests to assist Israel to develop and maintain a strong and ready self-defense capability.”

The defense minister hailed the purchases, saying in a statement that they were a critical part of the military’s preparedness, particularly against Iran.

“We are continuing to grow stronger, to change, and to adapt the air force to future challenges, those close by and especially those far from Israel’s borders,” he said.