With Lebanon in dire straits, Hezbollah seeks to cast Iran as country’s savior

With Lebanon in dire straits, Hezbollah seeks to cast Iran as country’s savior

Hezbollah supporters wave their group and Iranian flags during a protest on the Lebanese-Israeli border near the southern village of Kafr Kila, Lebanon, May 14, 2021. (AP)

Fuel prices in Lebanon rose Wednesday to new heights, with a single liter of 95-octane gasoline costing 71,600 pounds ($47) after a 45 percent price hike prompted by the ending of government subsidies. Even the price of donkeys has tripled over the past two weeks, compounding the severity of Lebanon’s economic crisis, which has brought it to the brink of complete collapse.

The disaster is seemingly being exacerbated by the Iran-backed Hezbollah terror group, which is a central part of the government and holds significant power in the absence of a functional leadership. Hezbollah could even be forcing this paralysis in an attempt to subjugate Lebanon to Tehran.

Lebanon’s economic and financial crisis has unfolded since late 2019, spiraling out of control in this country of over 6 million, of whom more than a million are Syrian refugees. A foreign currency shortage has crippled the import-dependent economy, leaving residents struggling to find fuel, medicines and basic supplies. Daily power outages last for hours, threatening hospitals and food stores, and draping entire neighborhoods in darkness.

The World Bank called it one of the worst crises since the 1850s and described Lebanon’s economic contraction as brutal. The national currency lost nearly 95% of its value, plunging the once middle-income country into poverty. Inflation and unemployment have soared and waves of professionals have migrated abroad, seeking a better life.

The political crisis is rooted in decades of corruption and mismanagement by a post-civil war political class that has accumulated debt and done little to encourage local industries. Banks, once a booming sector, have imposed informal capital controls and depositors are unable to freely access their accounts.

Lebanon has been promised billions in international assistance, pending a reform plan to deal with corruption. But vying for power and trading blame, the political elite never agreed. 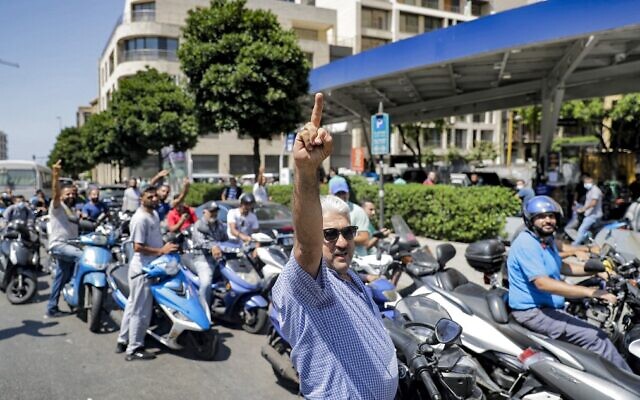 Scooter drivers waiting outside a gas station in Lebanon’s capital Beirut raise their middle fingers in protest against hikes in the price of fuel, June 29, 2021. (AFP)

It is difficult to predict where Lebanon is headed. Recovery doesn’t seem to be in the cards so long as Hezbollah, an extremist Shiite terror group, can act with impunity, apparently including trying to turn Lebanese citizens into beggars at the Islamic Republic’s doorstep.

This isn’t new for Hezbollah. When the coronavirus pandemic hit last year, it started pampering its Shiite supporters — and low-income families — with a range of benefits: a discount card for a new grocery shop chain that sells Iranian and Syrian products, new pharmacies with Iranian medications, and the brainchild of Hezbollah leader Hassan Nasrallah — a proposal to buy fuel from Iran.

It is doubtful this last offer is feasible, but it is designed to signal to the Lebanese population where help could come from. As all other interested parties such as Saudi Arabia and France are unwilling to aid Lebanon as long as there’s no functioning government there, Nasrallah is already trying to position himself and Iran as the country’s saviors.

Hezbollah’s growing hold and the disintegration of the Lebanese state continue a decades-long process in which the terror group has been slowly and steadily eating away at Lebanon’s sovereignty. Lebanon could be headed for a situation in which every sector and community withdraws into itself and only relies on its own people, while the state framework becomes purely theoretical.

A second scenario, slightly more violent and dangerous, would resemble the revolt of 2005, after Hezbollah members murdered then-prime minister Rafik Hariri. At the time, masses staged rallies demanding the expulsion of Syrian-backed forces from the country and the protests achieved their goal.

But that scenario today seems like complete fantasy. First of all, this isn’t a foreign army. It is a Lebanese organization that may be actively undermining the state but is nevertheless regarded by many there as a legitimate entity. Second, the masses aren’t taking to the streets right now. There are no chaotic demonstrations and no drama in the streets except for the occasional brawl at gas stations.

The third and most dangerous scenario would be a violent outburst reminiscent of the 1975 civil war or, alternatively, Hezbollah forcibly taking over central positions of power as it did against then-prime minister Fouad Siniora in 2008.

That scenario also doesn’t seem very likely. This week, the Lebanese Forces led by Samir Geagea — a Christian Maronite politician and one of most hated people in the country, who didn’t hesitate to slaughter innocent people in the 1970s and 1980s — erected roadblocks in the town of Zahle, bringing back forgotten memories from the civil war in the 1970s. But even Geagea, one of the most strident opponents of Hezbollah, knows his limits and is aware that his forces lack the ability to deal with the Shiite movement.

It is impossible to know what will happen in Lebanon, and there is always the possibility of good news. For example, if former prime minister Saad Hariri manages to put together a new government, that could definitely encourage Western aid to Lebanon.

Another possibility is that Iran and/or Russia will decide to intervene, which could bring some stability to Lebanon, at the expense of turning it into a province of a renewed Persian Empire.